SEOUL, June 3 (Yonhap) -- South Korea said Wednesday that it will invest 100 billion won (US$82.15 million) in developing treatments and vaccines for the novel coronavirus to focus mainly on supporting research on treatment using plasma, antibody treatment and finding efficacy in existing drugs.

"The government and private companies both will cooperate to secure homegrown treatments during this year and homegrown vaccines by next year," Health Minister Park Neung-hoo said during the meeting. 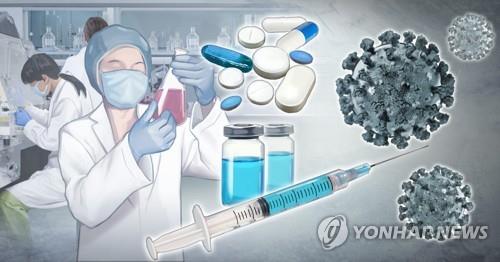 First, the government is aiming to develop local plasma treatment for COVID-19 within this year, according to officials.

Plasma therapy involves infusions of antibody-rich plasma from those who have fully recovered from COVID-19. Plasma, usually yellow, is the liquid portion of blood that remains after blood cells and platelets are removed.

A large number of blood samples is currently being collected from those who have recovered from the virus in cities such as the southeastern city of Daegu, once the epicenter of the local outbreak.

Joint work is also under way with local biotech companies, with clinical tests expected to take place in the next two to three months, they said.

The therapy, however, is still controversial among health experts as to whether it will be successful and effective for all virus patients.

The government also said it plans to develop antiviral antibody treatment by next year, with an aim of conducting human clinical trials by the latter half of this year.

Major local pharmaceutical firms, including industry leader Celltrion Inc. here, and research organizations are in the process of conducting clinical trials on animals.

However, none of them yet have received approval for clinical trials on humans from the country's drug safety agency, the Ministry of Food and Drug Safety.

As part of efforts to find efficacy in existing drugs, the government said it is currently reviewing the antiviral efficacy of Nafamostat, an authorized pancreatitis treatment. 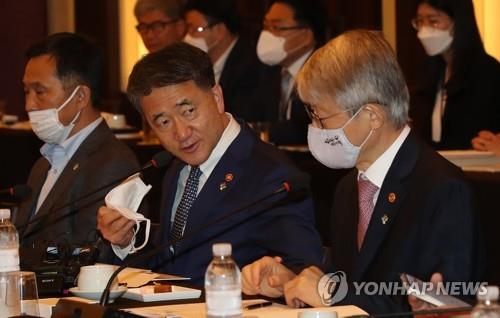 The ministry earlier approved a clinical trial to evaluate Nafamostat as it may block TMPRSS2, a human cell surface serine protease used by COVID-19 to infiltrate human cells.

Since the novel coronavirus' path to enter the human body is being revealed, researchers are actively exploring existing drugs that target TMPRSS2 involved in the virus' cell penetration.

Currently, three sets of research by research organizations are under way, and other local biotech firms have also joined the race to develop COVID-19 vaccines.

However, their research is at a relatively early stage at the moment, far lagging behind foreign rivals, according to experts.

"The government pledges all-out efforts in effectively responding to the pandemic crisis by utilizing all biotech resources," Minister of Science and ICT Choi Ki-young said during the meeting.