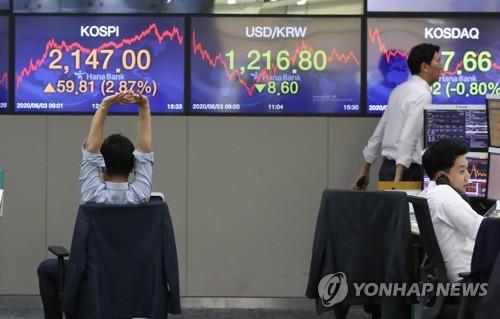 The stock market got off to a strong start on optimism for a global economic rebound, backed by rollbacks of lockdowns, despite the spreading anti-racism protests in the United States over the death of an African American man.

"Investor sentiment turned out to be more sensitive to the U.S. economic reopening and the central banks' supply of ample liquidity, rather than uncertainties from the protests," Samsung Securities researcher Seo Jung-hun said.

The latest developments in the Sino-American frictions showed room for easing.

Reports suggested that the U.S. is continuing to ship soybeans to China, dismissing earlier news that Beijing may be pressuring retaliation by pushing its state-run importers to stop purchasing American products. China's purchase of U.S. soybeans is a key component in the Sino-American trade deal signed in January.

Elevated hopes for an economic rebound led to a rally among large caps, particularly chipmakers, financials and steelmakers.

Bond prices, which move inversely to yields, closed lower. The yield on three-year Treasurys rose 1.5 basis points to 0.866 percent, and the return on the benchmark five-year government bond added 2.3 basis points to 1.150 percent.