His visit to Arrowhead Ridge in the central border town of Cheorwon and other DMZ areas was to check the ongoing demining and excavation operations and other military activities in supporting peace-building projects, such as the reopening of DMZ trail courses, according to the Army.

"The remains excavation operation is a noble mission and a duty of our armed forces," Suh said. "A slew of the war dead has remained buried inside the DMZ. The Army should have a heavy sense of responsibility to return those national heroes to their families and comrades."

The Army launched the excavation work on the ridge, one of the fiercest battlefields during the 1950-53 Korean War, in 2018, after the two Koreas agreed to do joint excavation work there in accordance with a bilateral military accord signed on Sept. 19, 2018.

But the South has carried out the project alone since last year, as the North did not respond to calls for joint work.

Since April 20, when the military resumed the excavation project for this year, it has discovered a total of 133 pieces of bone and 14,839 articles believed to have been left by deceased service members as of Saturday, according to the defense ministry. 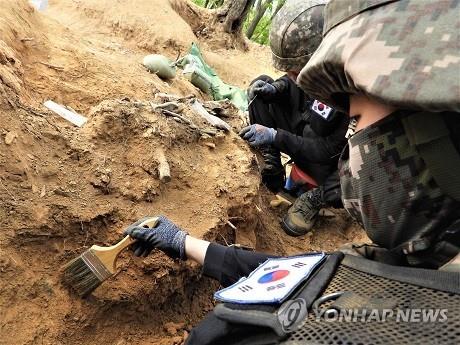