SEJONG, June 3 (Yonhap) -- South Korea's economy may contract by more than 2 percent in the second quarter of this year as the country reels from the effects of the coronavirus pandemic, the country's top economic policymaker said Wednesday.

In a interview with Yonhap News TV, Finance Minister Hong Nam-ki said while the country's real gross domestic product (GDP) posted minus 1.3 percent growth in the first quarter of 2020, compared with three months earlier, that number could fall into the lower negative 2 percent range in the April-June period, as the impact of COVID-19 is felt more widely.

The official, however, said that things could improve in the third and fourth quarters, if the outbreak comes under control in the country and other parts of the world. 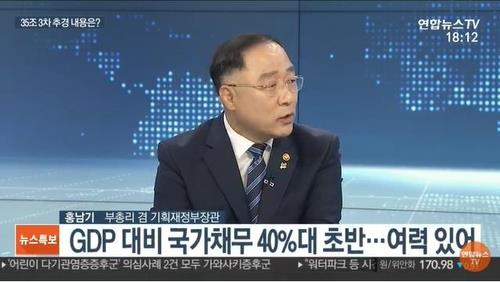 On the predictions made by the Bank of Korea that Asia's fourth-largest economy may contract this year vis-a-vis 2019, Hong said he is not ruling out such an outcome, but claimed that the huge stimulus package being pushed forward by the government, along with aggressive fiscal and monetary policies, could allow the country to post 0.1 percent overall growth.

"The growth target for this year is attainable if everything falls into place," Hong, who doubles as the deputy prime minister for economic affairs, said in the interview with the news-only cable channel.

Seoul earlier proposed the largest-ever extra budget of 35.3 trillion won (US$29 billion) that will be used to help key industries overcome the current coronavirus crisis. The plan, that needs to be passed by parliament, comes after the country approved an 11.7 trillion won supplementary budget in March followed by a 12.2 trillion won spending plan in April.

Touching on concerns that the latest extra budget will raise national debt to high levels, Hong stressed that taking no action at this juncture would do more harm to the economy.

He said aggressive use of all resources could lead to a rebound in growth and more tax revenue. Such a development, he argued, can benefit the country in the long run.

Hong then pointed out that while the debt ratio to GDP will reach 43.5 percent with the latest extra budget, that is still far lower than the Organization for Economic Cooperation and Development average of 110 percent.