SEOUL, June 4 (Yonhap) -- More than 30,000 employees at South Korea's state-run institutions worked from home in the first quarter of the year due to the novel coronavirus outbreak, government data showed Thursday.

A total of 31,148 workers at 363 state firms and other public institutions telecommuted in the January-March period, according to state portal All Public Information in One (ALIO).

The figure is nearly 22 times the full-year tally of 1,408 for last year. As of end-March, those institutions had a combined workforce of nearly 418,000.

Slightly over 70 percent of the state-run institutions, or 255, reported one or more telecommuters during the three-month period, more than nine times the number for all of 2019. 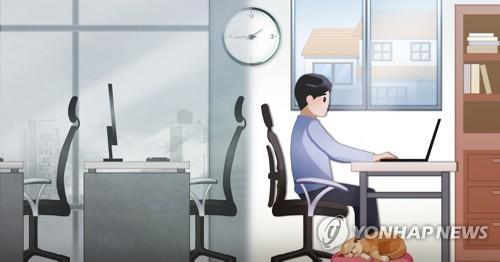 The first-quarter surge in the number of homeworkers at public institutions was attributed to the outbreak of COVID-19, whose first case was reported in South Korea on Jan. 20.

In February, the government urged public institutions, private companies and local governments to allow remote work as much as possible in a desperate bid to curb the spread of the viral disease.

The Korea Development Bank had the largest number of teleworkers at 2,385 in the first quarter, followed by Korea Gas Corp. with 2,061 and Korea Electric Power Corp. (KEPCO) with 1,823.

The novel coronavirus outbreak has so far infected 11,590 people and claimed 273 lives in South Korea.
(END)

Over 30,000 public institution employees work from home in Q1

Over 30,000 public institution employees work from home in Q1