In March, Korean Air offered a voluntary leave program to its employees as the COVID-19 pandemic sharply drove down air travel demand and began to affect its earnings.

The national flag carrier also offered the same program to its 376 foreign pilots. Some of the pilots already expressed their intention to take leave before the company proposed the plan.

The foreign pilots, except for dozens of them basically required for the operation of cargo planes, took the unpaid leave from April to June, a company spokeswoman said over the phone. 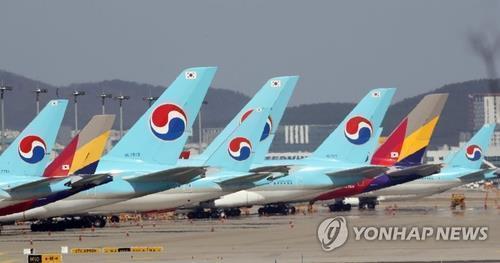 "The unpaid leave program for foreign pilots is extended until July as countries still maintain lockdowns and entry restrictions on incoming passengers," she said.

Korean Air has suspended more than 90 percent of its overall flights. It currently serves 101 flights a week on 26 international routes, sharply down from over 900 flights on 112 long-haul routes seen before the airline industry was hit by the pandemic.

Also Thursday, Asiana Airlines said it will extend the unpaid leave program for foreign pilots "until business environments for airlines improve to a certain level."

Asiana's 120 foreign pilots, except for dozens of them for the operation of cargo planes, entered the unpaid leave in March, a company spokesman said.

Asiana has also suspended over 90 percent of its total flights. It serves 57 flights a week on 15 international routes, down from 650 flights on 72 long-haul routes before the crisis came.

In other self-help measures, Korean Air had 70 percent of its 20,000-strong workforce take paid leave for six months starting April 16, and it is in the process of selling non-core assets to secure cash.

The company plans to raise 1 trillion won by selling stocks, and the country's two policy lenders -- the Korea Development Bank (KDB) and the Export-Import Bank of Korea (Korea Eximbank) -- plan to inject 1.2 trillion won into the carrier.

The KDB and Eximbank plan to inject a combined 1.7 trillion won into the cash-strapped carrier.

The two full-service carriers are widely expected to continue to report poor earnings results despite their self-rescue efforts and the state lenders' capital injection if the coronavirus continues to spread in some countries.