An anti-racism movement, sparked by the death of an African-American man, George Floyd, by a police officer late last month is turning violent in some parts of the U.S.

A total of 126 cases of property damage have been reported at South Korean-run businesses in the U.S. so far as some demonstrators took to rioting and looting in cities like Philadelphia, Chicago and Minneapolis, according to the South Korean foreign ministry as of Thursday.

Having a phone call with Ambassador Lee Soo-hyuck in the morning, Chung received a briefing on the latest state of the unrest in the U.S., as well as related damage cases on South Korean-operated stores and businesses there, according to the Prime Minister's Office.

Chung instructed Lee to "proactively make protective efforts for Korean nationals through Korean consulate generals" in link with the property damage in the troubled cities.

The prime minister also urged the ambassador to "cooperate closely with U.S. authorities to prevent further harm to Koreans," the office said.

"The foremost importance is to prevent any harm to human life," Chung told Lee, calling for efforts to ensure the safety of Koreans in the country. 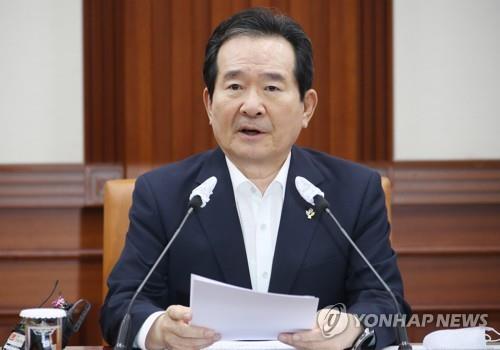