On Wednesday, the evening daily Munhwa Ilbo reported that USFK Commander Gen. Robert Abrams prematurely departed the Wartime Command Post during an initial operational capability (IOC) test in August last year, as he was "hugely disappointed" with its progression.

The test was meant to verify whether South Korea is on course to meet the conditions to retake wartime operational control (OPCON) of its troops from Washington. The two sides have been working for the conditions-based OPCON transfer. No specific deadline has been set, though many see the two sides eyeing 2022, or thereabouts, as the target date.

"Gen. Abrams' mother-in-law passed away on August 12, 2019 during the Combined Command Post Training. Upon notification, Gen. Abrams departed the wartime Command post and training event so he could fly to the United States immediately to be with his wife and family as they grieved this sudden passing," USFK said in a statement.

It said the report "grossly misreported" and "falsely speculated" what happened.

"To speculate that Gen. Abrams departed for any other reason is insulting to Gen. Abrams and dishonors his family who suffered a great loss," it added.

The U.S. military also pointed out that the article is "widely speculative, lacking factual basis and only harms" the 70-year-old alliance between the two nations.

Munwha said in the article that tensions are growing between the two sides, as USFK remains skeptical about carrying out the Full Operational Capability (FOC) test to move the OPCON transfer-related process forward.

"The ROK-US alliance is fully committed to a conditions-based OPCON transition and is working closely together to achieve that goal," USFK said, noting that the Munhwa reporters "should have followed journalistic standards and queried USFK."

Seoul and Washington are in talks to determine when and how to stage their joint military exercises in the second half of this year, after major springtime drills were called off over new coronavirus concerns, according to sources.

The summertime exercise was initially expected to take place around August to focus on the FOC test.

The conditions required to be created before the OPCON transfer are South Korea's capabilities to lead the allies' combined defense mechanism, its capacity for initial responses to the North's nuclear and missile threats, and a stable security environment on the peninsula and in the region. 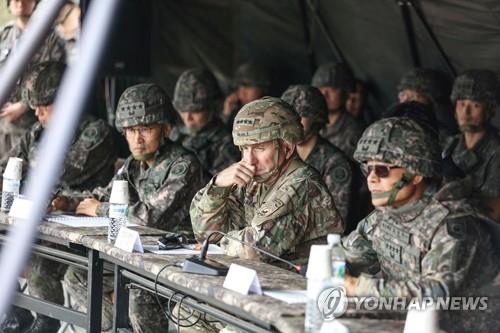