SEOUL, June 4 (Yonhap) -- A North Korea defector now serving as a lawmaker in the South claimed Thursday the government should not stop activist groups from sending anti-North leaflets across the border to ensure North Korean people's right to know.

Rep. Ji Seong-ho of the main opposition United Future Party was responding to a statement by Kim Yo-jong, the younger sister of North Korean leader Kim Jong-un, released earlier in the day.

Kim Yo-jong, in the unusually barbed statement, condemned propaganda leaflet operations at the border by South Korean activist groups and warned the Seoul government to stop the groups from sending the leaflets.

"The behavior of sending leaflets cannot be deemed as a wrong act," Ji said during a press conference at the National Assembly for foreign correspondents in Seoul.

Activists and North Korea defectors have often flown northward hundreds of thousands of fliers carrying explicit criticism against the North Korean regime and its leader at the border, raising the ire of the North.

She warned that such hostile acts could end a key inter-Korean agreement made in 2018, intended to stop military tension at the border.

Ji said the leaflet operations support North Koreans' right to know, and the right should be safeguarded.

"In reality, North Korean people are not properly informed about what's happening in the world ... their right to know needs to be guaranteed," he said.

Ji took office last week as a four-year term lawmaker with the main opposition party. He won a parliamentary seat in the April general elections on a proportional representation ticket.

Trump introduced Ji as a testimony to the North Korean regime's "cruel dictatorship." Ji held up his crutches as the chamber gave him a round of applause.

Ji lost his limbs while trying to steal some coal to barter for food, Trump said, only to be tortured later by North Korean authorities. He left North Korea in 2006.

The lawmaker said he plans to join the parliamentary standing committee on intelligence.

Going forward, he plans to propose to the parliament a new bill that will facilitate financial compensation for North Korean defectors who suffered human right abuses by the North Korean regime. 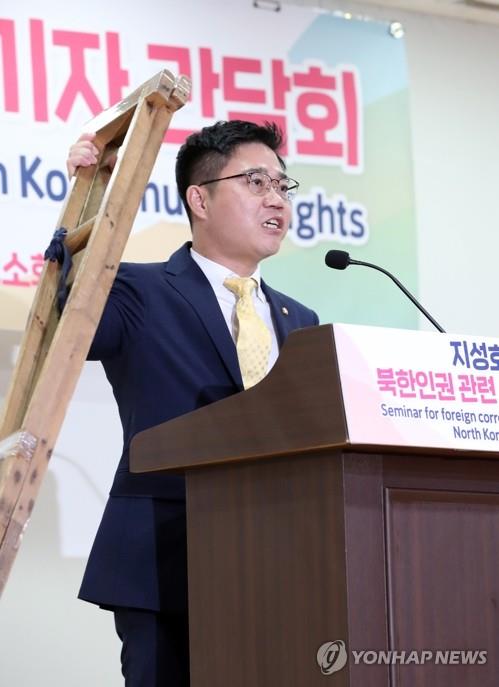