SEOUL, June 4 (Yonhap) -- K-pop superstars BTS on Thursday expressed support for the Black Lives Matter (BLM) movement in the United States, joining the worldwide initiative in the music industry to protest against racism and violence.

"We stand against racial discrimination. We condemn violence. You, I and we all have the right to be respected. We will stand together," the boy band wrote on its official Twitter account, with the hashtag #BlackLivesMatter.

The group's agency, Bit Hit Entertainment, said the septet will also contribute to an anti-racism activist group but did not disclose the name of the organization or the amount of money.

BTS supports #BlackLivesMatter movement saying, “We will stand together”

BTS' message came as the BLM movement has been spreading across the U.S. and the world, following the death of George Floyd, which was caused by a police officer last month.

Global pop stars, like Lady Gaga, Ariana Grande and Beyonce, have paid tribute to Floyd and pledged solidarity with the African-American community on their social media.

Major U.S. music labels, including Universal Music, had a one-day moratorium on business, called Blackout Tuesday, as a means of identifying with the protest.

At the same time, K-pop stars, like Crush and Jay Park, have also raised their voices via social media as part of their homage to African-American culture, which has been an important source of inspiration for K-pop.

Insiders said, given its influence and huge fanbase on the international stage, BTS' joining to the BLM movement is expected to have a great impact. 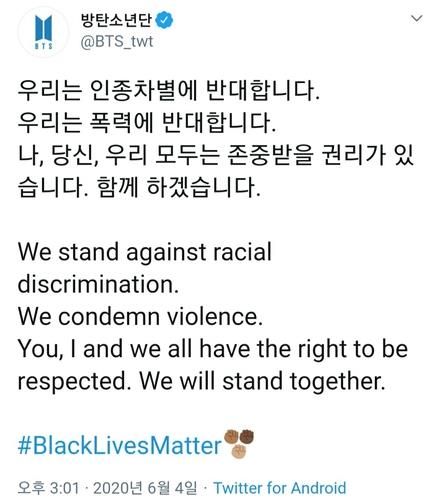