SEOUL, June 4 (Yonhap) -- South Korea's military is set to carry out a maritime combined arms drill next week as part of its ongoing efforts to hone the skill of its forces, official sources said Thursday.

The drill, which was originally planned for last month, was put off due to poor weather conditions, will involve the Army, Navy and the Air Force. The live fire training will take place on June 11 at a beach in Uljin, 330 km southeast of Seoul, on the east coast.

The military said that despite the delay, the size of the training maneuver will remain the same, with the Army's multiple launch rocket system firing at a seaborne target and Apache attack helicopters also taking part in the effort to neutralize a mock enemy.

In addition, the Navy is expected to launch its Harpoon anti-ship missiles with the Air Force light attack fighters joining in the fray, with air-to-surface missiles.

Sources said that the location of the drill is in adherence with the so-called Sept. 19 pact reached between the two Koreas to ease tensions on the Korean Peninsula. Under the agreement, both sides are barred from carrying out live fire drills within 40 kilometers of the Military Demarcation Line that separates the two sides. In the past, Seoul usually carried out its military exercises using live munitions in Goseong County, just south of the border with North Korea. 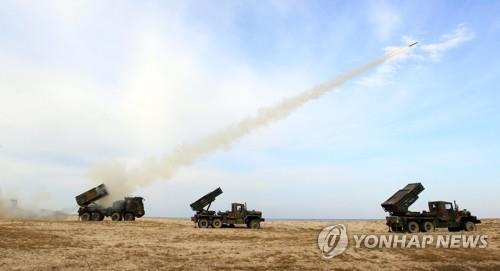