SEOUL, June 4 (Yonhap) -- U.S. Ambassador to South Korea Harry Harris said Thursday that he supports peaceful protests against racism in the United States but opposes those who condemn his country.

Harris posted on his Twitter a photo of a group of Korean protestors carrying a placard, reading "U.S. imperialism means 'I can't breathe!'"

"I disagree with these protestors, but respect their right to peacefully protest here in democratic Republic of Korea," he tweeted. "The U.S.A. will investigate fully and transparently George Floyd's killing." 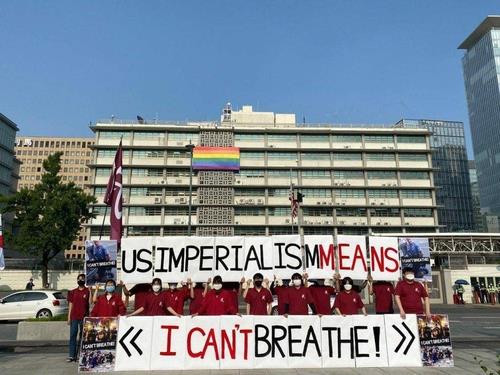 But he said he sides with the anti-racist demonstrations peacefully held in the U.S. as an Asian American who experienced segregation in the 1960s.

"Most demonstrators across the United States today are formed in peaceful protests against racism, bigotry and hatred," he said. "I stand with them. I share the conviction that those beliefs have no place in our society."

But he criticized vandalism, mayhem and destruction committed by some violent protestors.

"To those voices … who take perverse pleasure in what is happening in America today … I say we'll emerge a better country and a stronger democracy and we won't forget," he said.

The death of George Floyd, which was caused by a police officer last month, has triggered a huge wave of protests across the United States and even led to rioting and looting.