SEOUL/ YANGSAN, June 5 (Yonhap) -- President Moon Jae-in has purchased a property in Yangsan, a rural city in the southeastern part of South Korea, for a private residence to live in after retiring in May 2022, Cheong Wa Dae confirmed Friday.

Moon and first lady Kim Jung-sook bought the 2,630.5-square-meter land, where a two-story house is located, for 1.06 billion won (US$870,000) at their own expense, according to presidential spokesman Kang Min-seok.

The region is situated near Tongdo Temple, a famous Buddhist temple in Yangsan, South Gyeongsang Province, around 380 kilometers southeast of Seoul. The mountain temple is listed as a UNESCO world heritage site.

Separately, the Presidential Security Service (PSS) acquired a 1,124-square-meter plot of land there for facilities for bodyguards under a law on providing security for former presidents.

He had expressed hope to spend his post-presidency life there.

But the PSS was against it, citing security concerns caused mainly by the limited space of the Maegok-dong area, Kang said.

"As the state agency has concluded that it is impossible to carry out its mission (if Moon lives in the Maegok-dong site), it was inevitable to change the plan," he told reporters.

Moon plans to sell his house in Maegok-dong.

The spokesman said he is "a bit perplexed" to see the news on the president's private residence scheme at a time when the people are suffering due to the COVID-19 crisis.

He pointed out that it is rather early to talk about the matter in public, as the president has two more years in office.

However, Cheong Wa Dae decided to make it public in accordance with the principle of handling such an issue "transparently and strictly," he added. 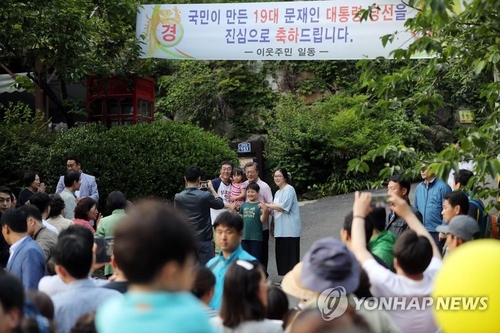