SEOUL, June 6 (Yonhap) -- What happens to the flowers and crops that decorate Seoul's riverside parks in spring and autumn?

That is set to change this year, as Seoul city government said Saturday it plans to run a pilot program to donate the flowers and crops as food for herbivores at a city-run zoo.

Under the plan, the city government will use some 22 tons of crops and flowers at some of the parks along the Han River as food for animals at Seoul Grand Park in Gwacheon, just south of the capital city.

This year, officials will use some 15 tons of canola flowers and seven tons of rye as "dessert" for the zoo's animals.

They said that zoo and park officials reached an agreement and checked that the canola flowers and rye harvested before ripening are appropriate for the animals.

Separately, they plan to donate around 800 kilograms of barley to social welfare organizations. 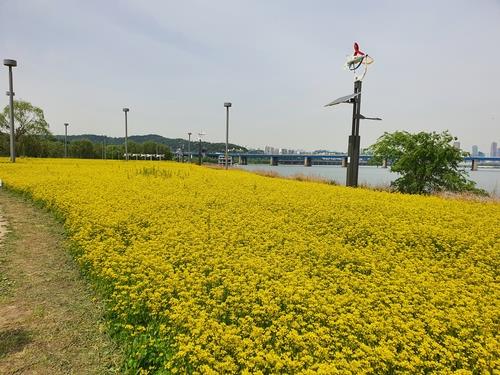