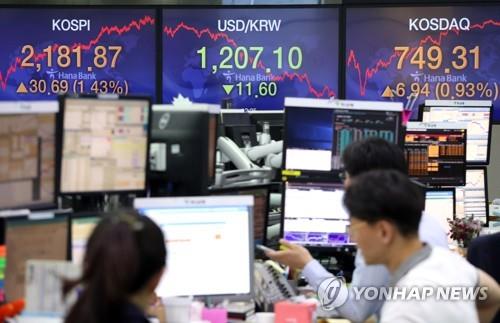 The recent gains have largely been attributed to growing hopes for an economic recovery, helped by stimulus measures in major economies, including Europe.

The FOMC is widely expected to freeze the interest rate at near zero, yet investors are hoping for the FOMC's additional stimulus measures, such as the yield-curve control. The emergency option involves purchasing Treasury securities to target the yield on a specific maturity.

"The yield-curve control may turn out to be more helpful than quantitative easing in maintaining low rates without having to stretch the Fed's balance sheets," DB Financial Investment analyst Seol Tae-hyun said.

Most other large caps finished in positive terrain.

Bond prices, which move inversely to yields, closed lower. The yield on three-year Treasurys rose 0.8 basis point to 0.894 percent, and the return on the benchmark five-year government bond added 1.0 basis point to 1.189 percent.