SEOUL, June 9 (Yonhap) -- Samsung Group on Tuesday breathed a sigh of relief as its de facto leader Lee Jae-yong avoided arrest over an investigation into a controversial merger between two group units a few years ago, but South Korea's largest conglomerate still faces the challenges of Lee's drawn-out legal battle and uncertainties caused by the coronavirus pandemic.

A Seoul court rejected an arrest warrant for Samsung Electronics Vice Chairman Lee, which the prosecutors had requested for his alleged involvement in the combination of the two Samsung affiliates -- Samsung C&T Corp. and Cheil Industries Inc. -- in 2015 and fraudulent accounting of a pharmaceutical unit. 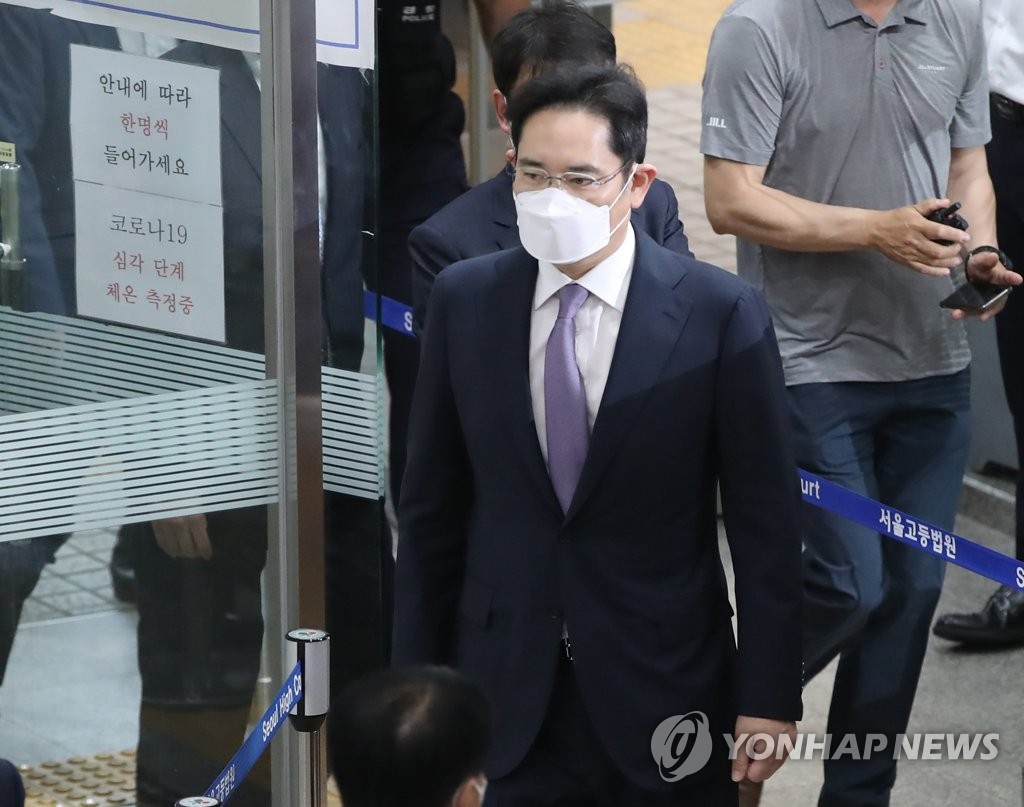 Even though Samsung avoided its worst-case scenario, the group is still on a full-alert mode as a legal battle over the charge against the heir apparent is not over.

There are possibilities of prosecutors seeking the arrest warrant again after collecting more evidence. Prosecutors could also indict Lee without detention and try to convict him through trials.

Industry observers said although Lee avoided arrest, Samsung's strategic business decisions may be put on hold since the group now has to focus more on saving the heir apparent from a series of trials.

Lee is still dealing with a bribery case that put him behind bars a couple years ago.

"If the leader (Lee) is absent due to investigations or trials, it will be difficult to manage the firm normally," said Choi June-sun, a professor at Sungkyunkwan University's Law School in Seoul.

Samsung's increased concerns over a possible leadership vacuum comes amid its efforts to overcome uncertainties caused by the novel coronavirus pandemic and renewed trade tensions between the United States and China. 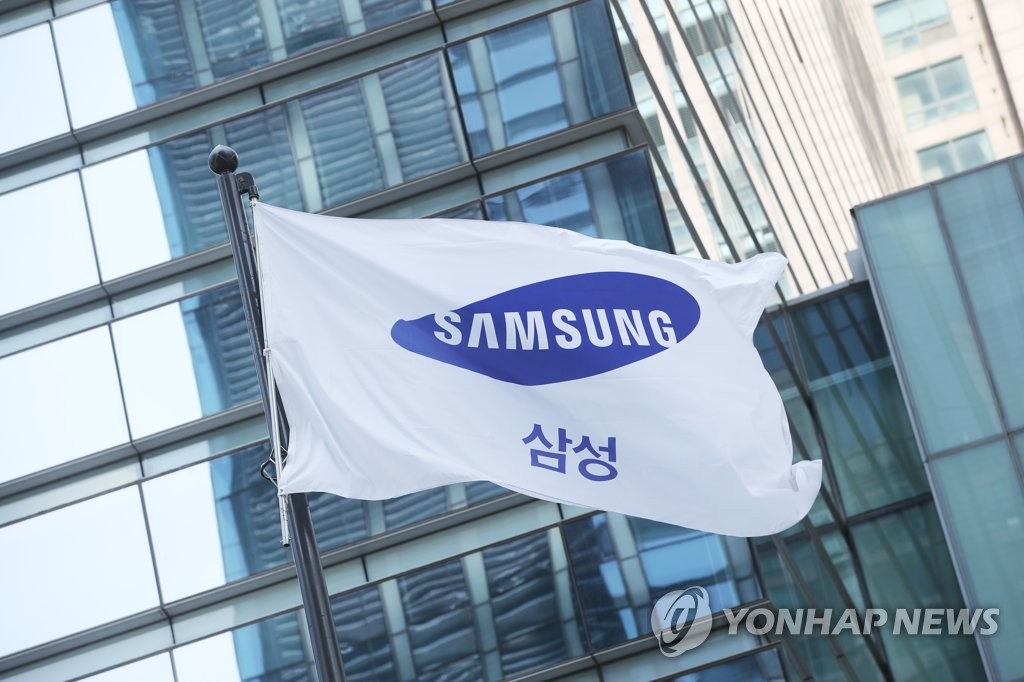 However, compared with the company's heyday in 2018, when it racked up an operating income of at least 10 trillion won in a quarter, its performance was mediocre. The world's memory chip and smartphone maker also warned of a tepid performance under the current quarter as the pandemic is expected to drag down its mobile business.

As a group, Samsung has been eager to improve its earnings. The 12 listed subsidiaries of Samsung Group chalked up 16.2 trillion won in combined operating income last year, down a whopping 65 percent from a year ago.

Lee has been active in spearheading the tech centered-empire's businesses strategy with massive investment plans since he got out of jail in 2018, but recent legal risks may limit his moves.

In August 2018, just six months after he got out of jail, Samsung announced a 180 trillion-won investment for the next three years, with 130 trillion won to be used in South Korea and vowed to create 40,000 jobs.

In recent years, Samsung Electronics is trying to expand its presence beyond the memory chip sector.

Last April, the company announced a vision that aims to become the world's No. 1 logic chip maker by 2030 by investing 133 trillion won to bolster its competitiveness in the system LSI and foundry businesses.

In addition to the chip making business, Samsung last year vowed to invest 13.1 trillion won through 2025 to develop its next-generation displays, known as quantum-dot displays. 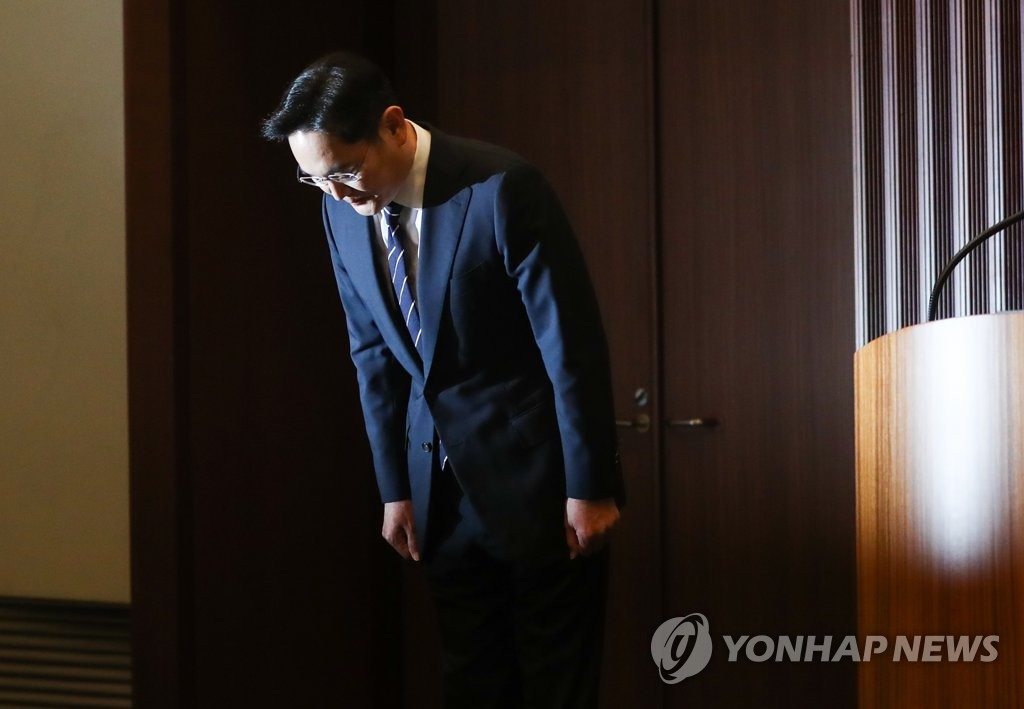 Despite the pandemic, Lee has been busy visiting Samsung's production sites around the globe, including its chip plant in Xian, China, in recent months to inspect their business plans.

Hoping for a positive public response ahead of the heir's trials, there is a possibility that Samsung may further push its compliance drive and show that it is making progress in pursing law-abiding management with Lee.

In his rare public apology last month, Lee apologized over controversies surrounding his succession issues and vowed not to pass on the managerial power to his children. He also promised to scrap the group's "no labor union" policy and actively speak with civil society for enhancing compliance culture.

Samsung in February launched an independent compliance committee to monitor its compliance actions. The committee recently urged the conglomerate to come up with detailed action plans backing Lee's compliance pledge.