The Hanwha Eagles have lost their past 14 straight games in the Korea Baseball Organization (KBO), and their manager Han Yong-duk resigned following the most recent defeat Sunday.

Before Saturday's game, the Eagles relieved five coaches on Han's staff of their duties and replaced them with minor league instructors. Then after Han's departure, they reshuffled the staff while naming their minor league skipper Choi Won-ho as the interim manager Monday. 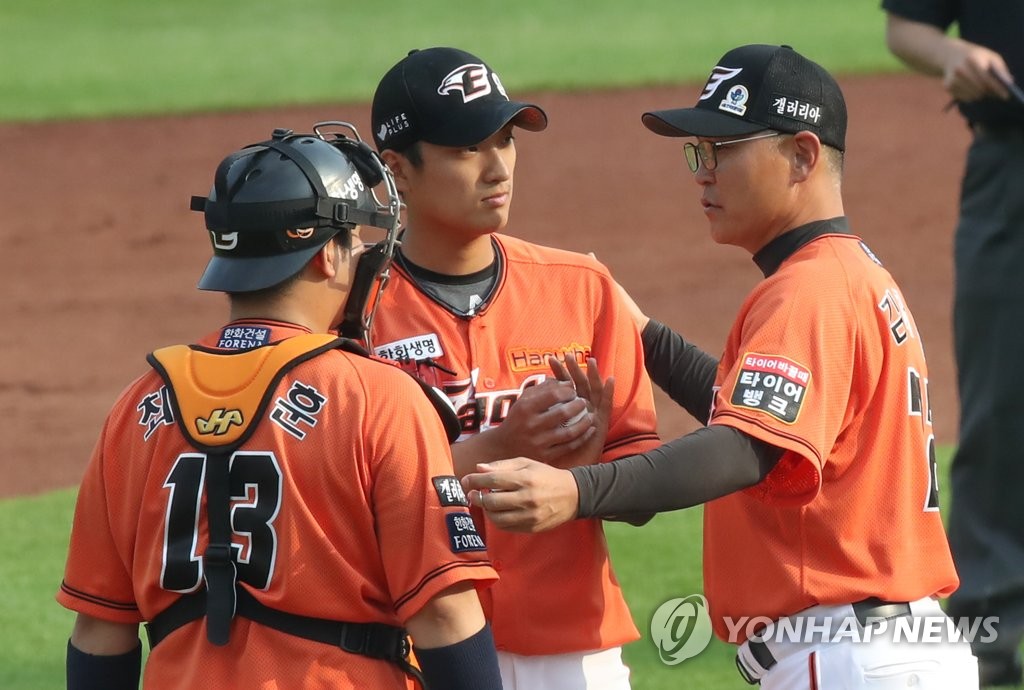 Let's get the obvious out of the way: This team is in complete shambles.

Will there be light at the end of the tunnel? They will win at some point this season, but when you look at the big picture, the Eagles have been in this tunnel for 12 years, except for a brief moment in the sun two seasons ago.

The Eagles have not finished in last place since the KT Wiz joined the KBO as the 10th club in 2015, but they ended up second-to-last in 2019.

The Eagles will be back in action Tuesday against the Lotte Giants, the only opponents against whom they have a winning record this year at 2-1.

But this isn't the same Giants team that the Eagles beat twice in a three-game set from May 15-17. The Giants just swept the Wiz this past weekend.

The Eagles will send their ace Warwick Saupold to the mound Tuesday in hopes of ending the slide. Saupold, one of the KBO's most reliable starters, has given the Eagles five quality starts -- three or fewer earned runs allowed in at least six innings pitched -- in his six outings so far. 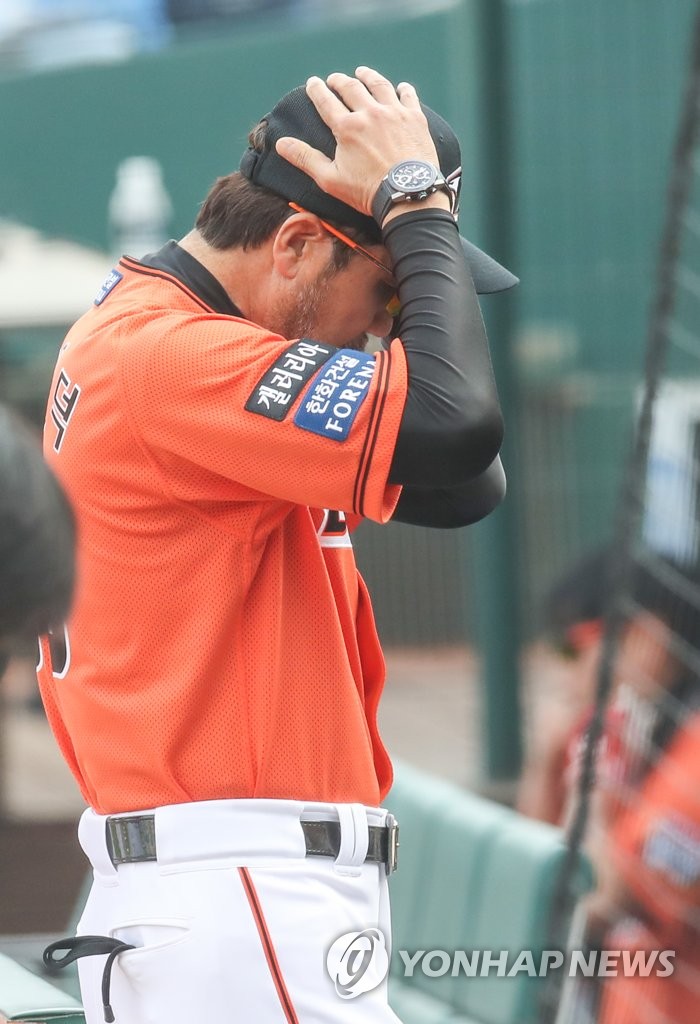 The Eagles could certainly use another quality start from Saupold, and they also have to start hitting.

During their current 14-game losing skid, which began on May 23, the Eagles have been outscored by a whopping margin of 120-36. No team has given up more and scored fewer runs in that stretch. They have put up .207/.266/.298 in batting average, on-base percentage and slugging percentage. All figures are the worst in the league during the span.

Starters outside Saupold have struggled. Since May 23, the Eagles have posted a 7.96 ERA with 26 homers allowed and 67 walks, all of them worst in the league. Their starters have given them just 4 1/3 innings per outing on average, the lowest total in the KBO. Opponents have batted .337/.417/.561 during this slide.

For the entire season, the Eagles are the KBO's worst pitching team and worst hitting team.

If the Eagles don't end their slide against the Giants, they'll run into the Doosan Bears, starting Friday, trying to stop the streak against a team that won four straight games last week.

The longest losing streak in KBO history belongs to the defunct club Sammi Superstars, which lost 18 straight in 1985. It's not inconceivable that the Eagles could break that this week.

How did it get to this point? They say champions aren't built overnight. It turns out cellar dwellers are also made over a long stretch of ineptitude.

For over a decade, the Eagles have been carrying thin rosters with few viable backups behind 30-something veterans. 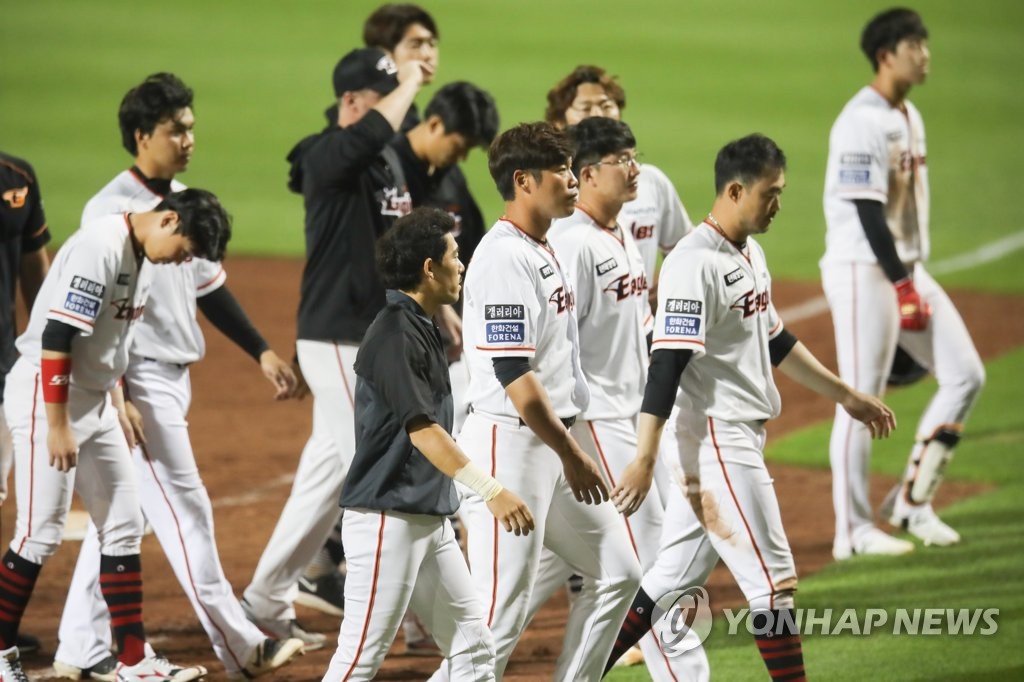 This year, the likes of 35-year-old designated hitter Lee Sung-yul (.226/.268/.302) and 36-year-old third baseman Song Kwang-min (.217/.247/.348) wouldn't be playing much on other clubs. But they've been getting regular time with the Eagles because there simply aren't enough players who are capable of replacing them.

They're saddled with the aging squad because they have been spending money on expensive free agents and giving up prospects in compensation for signing those players. Some of them have gone on to better things with other clubs, including Kia Tigers' starter Im Gi-yeong and SK Wyverns' outfielder Ro Soo-kwang.

Young players that did stick around with the Eagles got run into the ground under previous regimes. Once-promising pitchers Kim Min-woo and Lee Tae-yang both had elbow surgeries earlier in their careers.

The lack of stability at the top hasn't helped. Since 2010, three of the four Eagles' managers were either fired or forced to resign before the end of their deals. Kim Eung-yong, the only one of the group not to receive the pink slip, oversaw two last-place clubs in 2013 and 2014. Kim wasn't renewed after his two-year contract ran out, and he hasn't managed since, his sterling reputation as the winningest manager in KBO history damaged beyond repair.

It seems unfair to ask Choi, who has no prior managerial experience at any level, to take over such a floundering team. It will surely be a trial by fire for the interim boss. 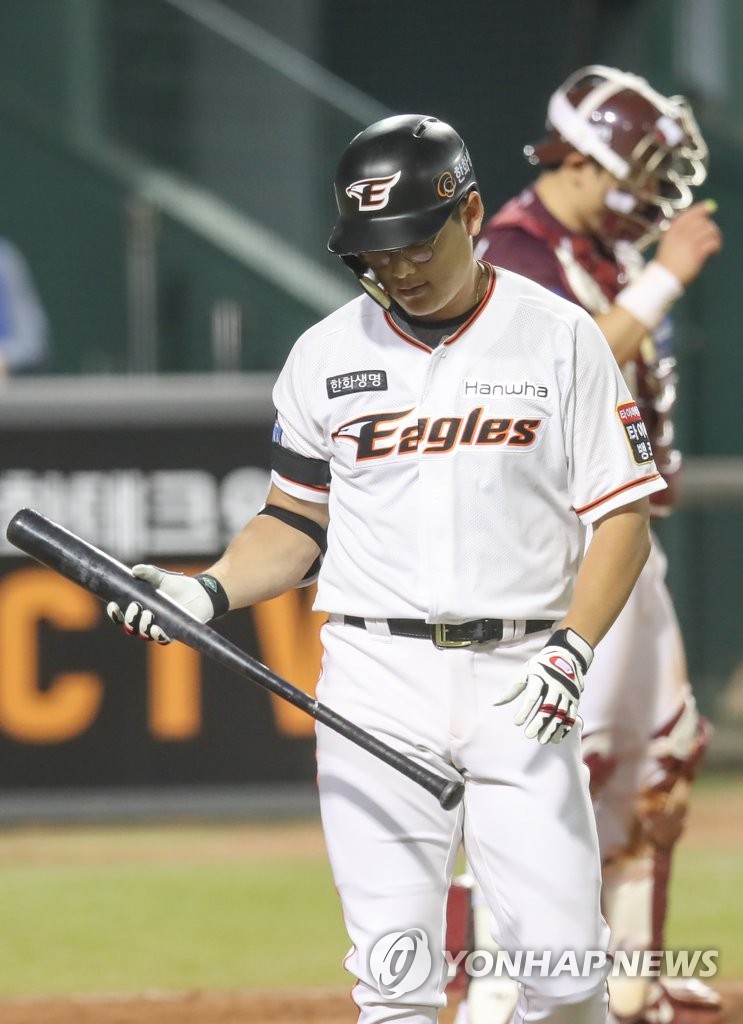