SEJONG, June 8 (Yonhap) -- The amount of state funds paid out as unemployment benefits surpassed 1 trillion won (US$830 million) for the first time last month, data showed Monday, due largely to the negative economic impact of the new coronavirus outbreak.

According to the Ministry of Employment and Labor, the government paid 1.16 trillion won in benefits to those struggling to find jobs in May, marking a 33.9 percent increase from 758.7 billion won paid in the same month last year.

The ministry said about 111,000 people applied for jobseeker benefits last month, up 32.1 percent from a year ago, suggesting that most of them appear to have been affected by the spread of COVID-19.

The ministry attributed the record payments to an increase in new applications, as well as a rise in both the amount of payments and an extension in the period under which benefits are offered.

From a year ago, the number of new subscribers for April reached 13.82 million, up 1.1 percent. 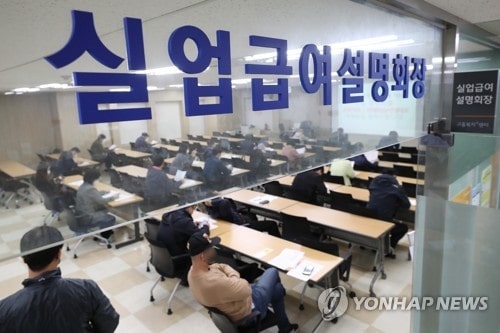