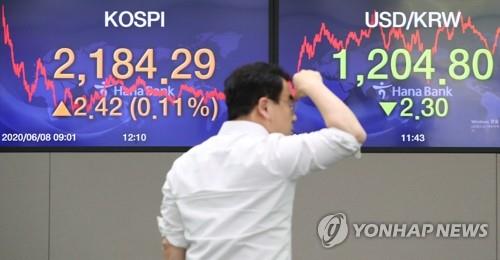 The index erased most of the early morning gains as Samsung Electronics Vice Chairman Lee Jae-yong appeared in a court for questioning by a judge over whether to approve an arrest warrant.

The Samsung heir is under investigation over a controversial merger of the two Samsung affiliates in 2015, a key process in his takeover of Samsung Group from his ailing father, Lee Kun-hee.

The assessment results of Lee's arrest warrant are set to be announced late Monday night at the earliest.

Despite the Samsung losses, the KOSPI managed to close in positive terrain, helped by positive leads for a global economic rebound.

The KOSPI is likely to stay in a tight range though, analysts said.

"The surprise improvement in the U.S. jobless data fueled hopes for a V-shaped economic recovery, but it also raised the possibility of stock dumping for profit-taking," Kiwoom Securities analyst Seo Sang-young said.

Bond prices, which move inversely to yields, closed lower. The yield on three-year Treasurys gained 0.8 basis point to 0.902 percent, and the return on the benchmark five-year government bond added 0.2 basis point to 1.191 percent.