SEOUL, June 8 (Yonhap) -- A renowned U.S. scholar has pointed to South Korea's "greater sense of community and social cohesion" as what has driven progress in its fight against the new coronavirus, calling it "impressive."

Michael J. Sandel, professor of government at Harvard University, made the remarks in an online interview organized by the foreign ministry, part of a series of talks with renowned intellectuals on the post-COVID-19 era.

"I think one important difference is whether there is a strong enough sense of community so that people are willing to approach this crisis in a spirit of shared sacrifice to combat the virus and to promote public health and seek the common good," he said in the interview released on Sunday.

"My impression is that in South Korea, one of the reasons for the success compared to other countries is a greater sense of community and of social cohesion," he added. 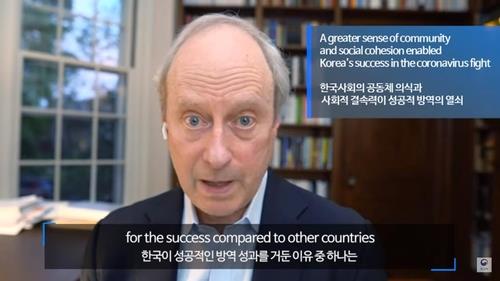 The scholar enumerated a series of examples of things members of South Korea's civil society have voluntarily done to help people in need during the pandemic, such as landlords reducing rents for small businesses or tenants.

"In South Korea, there has been something that goes beyond philanthropy and charitable activity but voluntary associations and responses from within civil society, independent of what the government has done," he said.

"This is very impressive because it arises from within civil society. And it shows that common regard, respect and concern for one another. It goes beyond what a government alone, even effective government action, can do," he added.

During the interview, Sandel called attention to the deep divisions in society, which he said were highlighted during the pandemic, while stressing the need to "rearrange our economy and society" based on the "principle of the common good, solidarity, social cohesion."

"Those of us who are able to work from home are relatively safe from the COVID virus, whereas those who have no alternatives but to go to work in close proximity to the public, not only in the hospital but in grocery stores, delivery people, warehouse workers, who are often not rewarded very well for their services," he said.

"The people confronting the greatest risks today are the least paid workers. And I think we should learn something from that and try to bring them out in a more equal society, more fair society in the aftermath," he added.

South Korea's response to COVID-19, based on its "principles of openness, transparency and democratic procedures" has gained international recognition as it has led to a slowdown despite the absence of lockdowns or border closures.