SEOUL, June 12 (Yonhap) -- After Yi Si-woo got off work last Friday, he hurried home to start preparing for a company dinner, cooking seafood risotto with fresh salad on the side.

An hour later, the 24-year-old was joined by a dozen others in his studio with barely enough space for a smaller group, but none had to stand, as each and every person was in the comfort of their own home for their online company dinner.

"The idea was to share a moment, not the actual food. People prepared their own dishes at home and met online through videoconferencing to eat and talk together without the danger of catching the new coronavirus," Yi said. 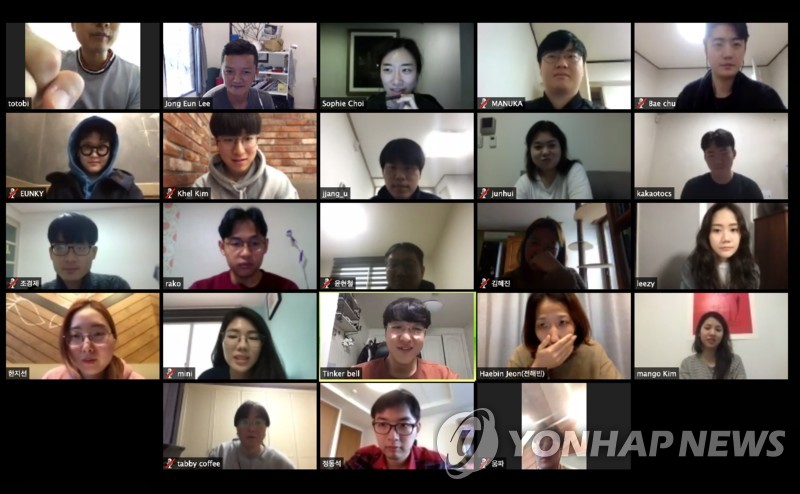 The so-called remote dinner parties began about two months ago, when Yi's company, an industrial materials manufacturer in Seongnam, just south of Seoul, decided to have all of its non-essential employees work from home in the midst of the new coronavirus outbreak.

All unnecessary meetings, including company dinners and gatherings, immediately stopped.

Running a business in South Korea became more difficult when the country launched a strict social distancing campaign in late March, encouraging people to stay home whenever possible and to avoid all unnecessary gatherings.

The campaign, originally set to end after 15 days, lasted until May 5, when the country shifted to slightly lax social distancing.

Even to date, however, eating together is often considered hazardous, if not unwise.

"People were obviously afraid to meet other people in person because of the new coronavirus. There was little reason for people to want to meet colleagues just to have dinner when they were choosing not to meet their own friends," Yi said.

"Company dinners are considered a valuable chance to develop a bond between workers, and thus enhance their sense of being on the same team," said the head of Yi's company, who asked not to be identified.

"Business owners tend to believe eating together helps create not only friendship but a common goal for employees, which is often key to running a successful business," he said, highlighting the importance of company dinners in Korean culture by adding that "shikgu," one of the Korean words for family, literally refers to those who eat together. 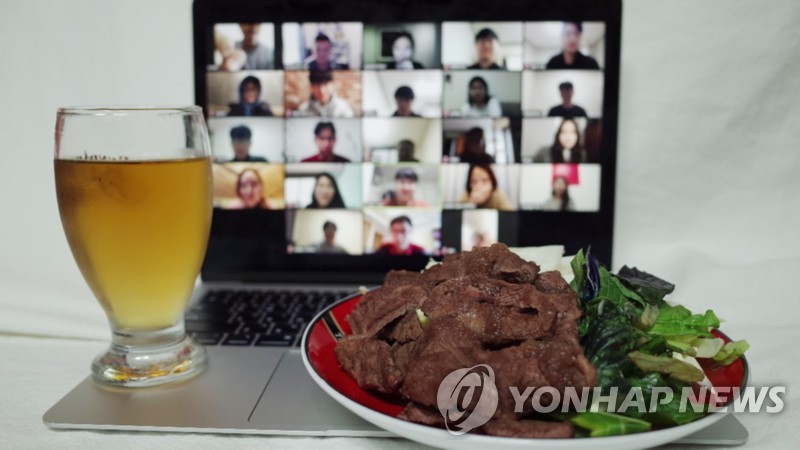 Large restaurants, including those at highway rest stops, continue to arrange their seats in one direction or in alternating positions to have all customers face the same direction or maintain a safe distance from one another.

"Getting together was simply out of the question when all workers were told to work from home," said Hong Eun-kyeung, a marketing manager at Platfarm, an IT firm based in Seoul that creates emojis for online communication.

"At first, we began holding (online) tea parties because most of our employees were home alone and wanted to socialize with others. They were getting bored, and they wanted to get together one way or another," said the 27 year-old when asked if the company could not have simply done away with company dinners for the time being.

To make it voluntary, the company made it a contest where each person is given 20,000 won (US$17) and those who come up with the most scrumptious-looking and best-value meals for the money win.

About 20 employees have taken part in each of the contests held every last Wednesday of the month since February.

"People are having fun just participating. It may have been possible because we are a young IT firm, but people seem to enjoy creating their own content with the food they choose and sharing their dish with others online, instead of just eating the food," Hong said. 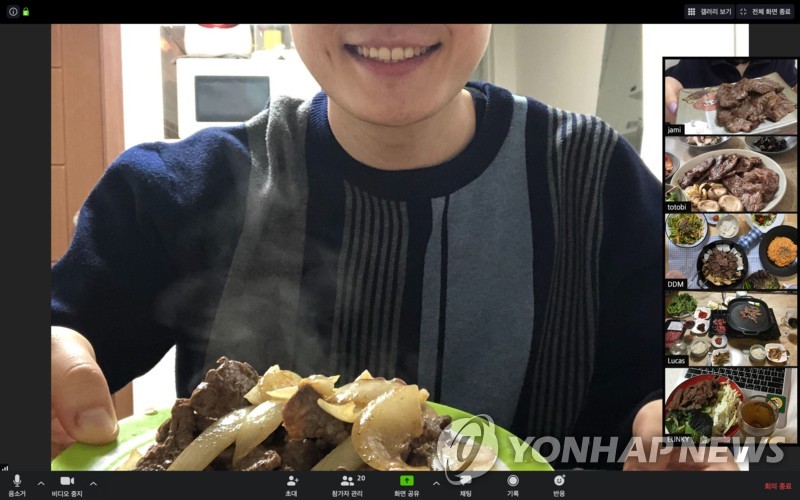 Such voluntary efforts by local businesses and their employees to prevent the spread of the new coronavirus have, at least in part, kept South Korea from seeing a large number of work-related infections.

The total number of COVID-19 cases here still remains at below 12,000, more than four months after the country reported its first confirmed case, which marks a sharp contrast from the rest of the world, where more than 100,000 infection cases are reported daily.

"Keeping a 2-meter distance, or at least a 1-meter distance, between people helps prevent infections," she said recently, citing a report from a British research institute.

Chung noted wearing a mask can help reduce the infection risk by 85 percent, even in a high-risk environment.

Wearing masks in a safer environment may further reduce the risk, she added.