Park, a liberal politician mentioned among the ruling camp's presidential hopefuls, said in a radio interview that propaganda leaflets sent across the border to denounce the Pyongyang regime are not desirable and could undermine peace between the two Koreas.

Defectors and anti-Pyongyang activists have sent a large number of leaflets via giant balloons criticizing the communist regime and its leader Kim Jong-un. These are often launched with US$1 bills and USB memory sticks to get more North Koreans to pick up the leaflets.

The propaganda leaflets have again emerged as a hot button issue after the North Korean leader's sister, Kim Yo-jong, last week condemned them as a hostile act running counter to inter-Korean peace agreements. 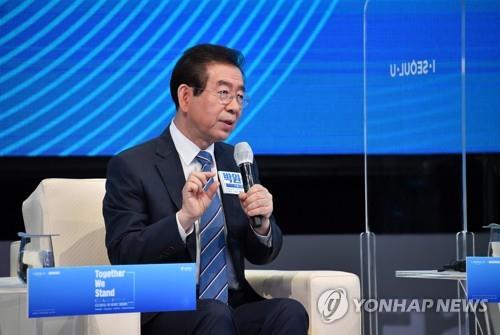 In response, South Korea's government immediately promised to ban such activities through legislation, though defectors and activists have vowed not to give up their campaign.

"Sending propaganda leaflets (into the North) is not desirable particularly from the standpoint of progress in inter-Korean relations," said Park in the interview held with BBS radio.

"It can be possible anytime to point out problems with North Korean human rights (violations). Under the current circumstances, however, the North Korean regime won't like the influx of propaganda leaflets (from South Korea). It could harm bigger things, like inter-Korean peace," Park said.

As seen in the history of some European countries, he stressed, many media and people have retrained themselves for national interests.

The mayor then likened the cross-border relations to a task of going over a range of mountains, instead of a single mountain.

"We have hoped for the arrival of a new order but a difficult situation has come due to several small issues. A good day will come if we all make efforts together," Park said.

Park also spoke on the ongoing debate on whether to allow Paik Sun-yup, one of South Korea's Korean War heroes, to be buried at Seoul National Cemetery, which is opposed by some ruling party lawmakers due to his alleged pro-Japanese activities during Japan's colonial rule of the Korean Peninsula.

"All pro-Japanese (collaborators) should be thoroughly eradicated," Park argued. "Pro-Japanese factors have still influenced South Korea. Independence activists must be valued more in order to maintain the spirit of independence."