SEOUL, June 9 (Yonhap) -- A major debate over the idea of a state-funded basic income scheme is in full swing in South Korean politics, as the country tries to navigate its way through the post-COVID-19 era and address potential job displacements in an increasingly AI-driven economy.

Kim Chong-in, a former economist and lawmaker, now serving as the interim leader of the main opposition United Future Party (UFP), proposed the discussions on the rather radical welfare plan last week.

The basic income plan, similar to the "Freedom Dividend" policy of Andrew Yang, a former U.S. Democratic presidential candidate, is based on the idea of providing a government-ensured income enough to meet citizens' basic material needs even without having to work.

The idea is in line with a larger global debate on how to deal with increasing job displacements on the back of the advent of technological revolution, also known as the fourth industrial revolution. And it came to the fore recently as countries seek ways to curb the economic fallout from the COVID-19 pandemic that has severely hurt the livelihood of households, especially those in the lower income bracket.

Spain, for example, adopted a basic monthly income for struggling families last month, while the action is rekindling discussion on a pan-EU minimum income.

In South Korea, following the proposal by the leader of the main right-wing party, the welfare discourse has emerged as a hot button topic for the liberal politicians angling to run for the next presidential election, as well as for the conservative party straining to shed its right-wing image. 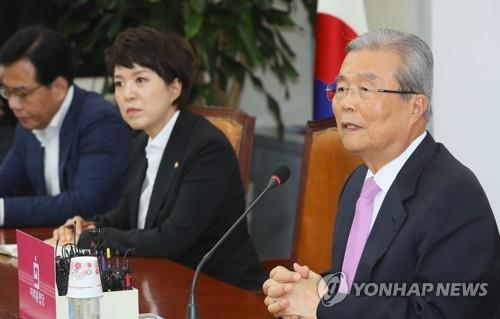 As soon as he took office as the chairman of the UFP's emergency leadership committee last week, Kim gave shape to his basic income vision.

"The value of freedom as pursued by conservatives is only a titular freedom ... the basic goal of politics should be for the party to (find out) how to bring actual freedom to reality and maximize material freedom (of people)," Kim noted during a lecture to the party's first-time lawmakers last week.

In another meeting, Kim named shrinking employment and the need to harness the economy as reasons to consider basic income.

Kim, however, made clear that the basic income he envisions is not a universal benefit but only for those without jobs. He also said means to finance the welfare program should precede actual implementation.

The surprise proposal from the conservative party drew criticism from some experts for being "unrealistic" and a political stunt to boost the party's image following its devastating defeat in the general elections in April. It, however, immediately brought together prospective Democratic Party presidential candidates for what could be seen as a pre-election agenda-setting debate.

"I wish that (through this opportunity) a review and discussion could be held on the concept of a basic income program, as well as its welfare system and financing (resourcing) plan," Lee told Yonhap News Agency a day earlier.

Gov. Lee Jae-myung of Gyeonggi Province called the introduction of a basic income "inevitable," saying the country needs to start adopting it at a low level before further expanding it.

Joining the debate, Seoul Mayor Park Won-soon noted that what the country needs right now is employment insurance for all rather than a basic income. 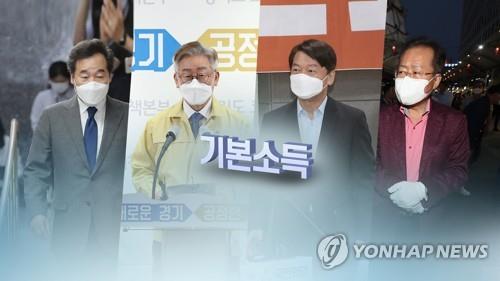 "If it was implemented, the public may need to accept a radical tax hike and a far-reaching readjustment to the welfare system," Hong said, rejecting the proposal.

Ahn Cheol-soo, head of the minor People's Party, noted that the debate could lead the country in the path of bankruptcy if it becomes a competition about who could give more as a basic income.

Former lawmaker Yoo Seong-min of the conservative bloc, who recently announced his bid for the next presidential election, said, "The conservative's value is still effective," alluding to his objection.

The presidential office Cheong Wa Dae has also dismissed the basic income debate as "too early."

"There's not many actual implementation cases (in the world) ... consideration of the system in earnest could come only after a long discussion on resourcing and other issues win agreement," a high-ranking presidential official said.

Public response to the basic income proposal is almost evenly mixed. Some 49 percent of the 500 adults polled by Real Meter last week were in support of the introduction of a basic income. Another 43 percent opposed the idea.

As the discussion on a basic income picked up traction, a bipartisan discussion group, tentatively named "basic income study group," led by DP Rep. So Byung-hoon, has been formed. The group is reportedly planning to present a bill on a basic income to the National Assembly in cooperation with opposition lawmakers before the end of June.