SEOUL, June 9 (Yonhap) -- JTBC's "The World of the Married" and SBS' "Hot Stove League" are some of the biggest hit TV series in the first half of this year.

The two dramas have one thing in common: They are works by up-and-coming young directors who get a good head start on their careers in the rapidly changing media entertainment.

Based on the BBC One TV series "Doctor Foster," which aired in 2015 and 2017, the JTBC series is about a dedicated wife, played by Kim, who finds out about her husband's betrayal and takes revenge against him. 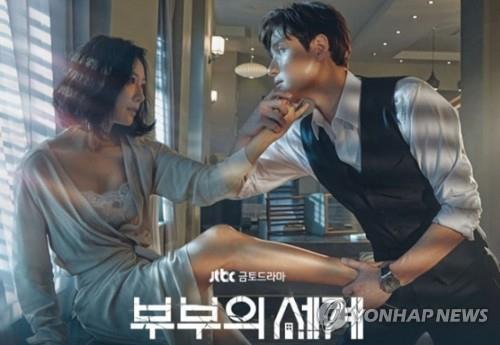 Director Mo Wan-il was good at weaving the genre of mystery and romance in a dramatic story in the mystery romance thriller "Misty" (2018) on JTBC, his directorial debut.

Two years later, he came back with the R-rated series, whose upgraded intense suspense and unpredictable storytelling made viewers experience a wild emotional rollercoaster.

The final episode of the series on May 16 recorded viewership of 28.371 percent, surpassing the previous record of 23.8 percent set by another JTBC drama series "SKY Castle" (2019).

"Hot Stove League," a story about the general manager of a professional baseball team that hit nearly 20 percent in viewership, was directed by Jeong Dong-yoon. It is his first 16-episode drama series following two short TV series on SBS.

Jeong's realistic portrayal of offseason player transactions among baseball clubs, salary negotiations and behind-the-scenes scouting for new talents gained popularity not only from baseball superfans but also those who do not watch sports.

The tvN drama "My Unfamiliar Family" is also the maiden work of director Kwon Young-il, who participated in the office drama "Search: WWW" (2019) as an assistant director.

Without a big-name cast, Kwon's intriguing storytelling about the relationships and misunderstandings among families who act like strangers had a good start, hitting nearly 4 percent in its first week.

Experts said the diversified platforms and increased TV channels have expanded ways for young directors to make their presence felt.

"If they have good ideas, rookie directors can be given chances to build their careers on the back of an effective TV production system in South Korea," culture critic Gong Hee-jeong said. "They can display their creativity on various platforms."