The government of Seoul said it will begin test operations of the futuristic bus stops, dubbed "Smart Shelters," at 10 locations in October before expanding the new features to all bus stops located on exclusive median bus lanes throughout the capital next year.

Seoul has exclusive bus lanes in the center of roads or at roadsides. The city will first install the ICT-based bus stops at all those located in the middle of roads before considering expanding to all roadside bus stops after a review of the initial operations. 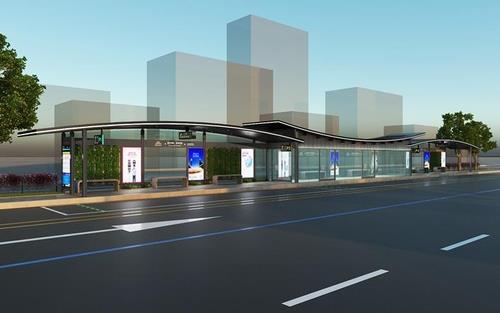 According to the municipal government, the Smart Shelters will be equipped with things most wanted by citizens waiting for buses, such as wireless mobile phone chargers, heated chairs and free Wi-Fi.

In addition, ceiling-type air cleaners, indoor and outdoor air quality monitors, air curtains blocking the inflow of outdoor air, systems that provide fine dust information, and screen doors will be installed at the shelters to help keep the air clean.

The shelters will also have surveillance cameras, an emergency bell and a heart defibrillator in case of emergencies, municipal officials said, adding Internet of Things sensors will inform passengers of the exact arrivals of incoming buses.

They said such bus stops featuring diversified functions and services are unprecedented worldwide.

The Seoul government said it will finalize the design of the Smart Shelters after inviting citizens to vote online on three candidates at its website until June 24.