While the number remained lower than a daily peak of more than 830 last month, health and educational authorities are concerned that most of the affected schools were located in the densely populated Seoul and its adjacent cities.

The Ministry of Education said 520 schools had shut down as of 10 a.m. Tuesday, a day after the country wrapped up its four-phased reopening of schools that began less than three weeks ago.

The tally accounted for 2.5 percent of the nation's total 20,902 schools, including kindergartens.

Among them, 509 schools, or 98 percent, were in the capital area that refers to Seoul, Incheon and Gyeonggi Province. 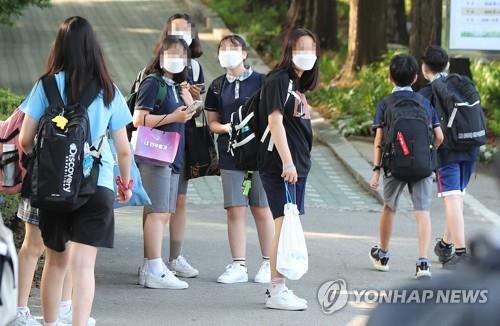 Meanwhile, the ministry breathed a sigh of relief Tuesday, as no infections were reported in connection with a high school COVID-19 patient who visited Lotte World Adventure, a popular leisure destination among young children in Seoul.

The ministry said all 769 students and staff at Wonmook High School in the northwest ward of Jungnang in Seoul tested negative for the virus.

Upon hearing the news, the authorities tested 138 people for the virus, who were considered at higher risk of infection, on the same day.

The next day, a temporary testing site was set up at the school where the remaining 631 people were tested for the coronavirus.

Since the reopening of schools began last month, the ministry has braced itself for a potential outbreak at schools. It has prioritized preventing the virus from spreading among school children by putting in place a rigorous tracing and testing program at schools and giving autonomy to schools to quickly decide on closures in case of an emergency.

Most schools closed due to COVID-19 located in capital area

Most schools closed due to COVID-19 located in capital area