The seasonally adjusted unemployment rate stood at 4.5 percent in May, marking the highest level since January 2010, according to the data compiled by Statistics Korea.

It was the first time that the nation lost jobs for the third straight month since October 2009 amid the global financial crisis.

The employment rate for young adults -- those aged between 15 and 29 -- also fell 1.4 percentage points on-year to 42.2 percent last month. 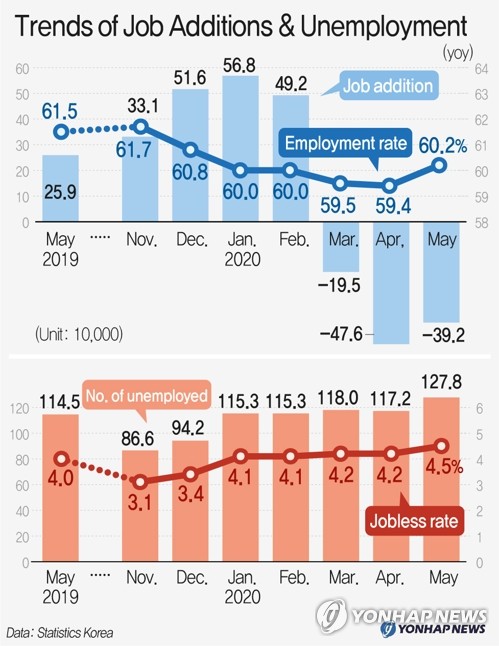 In a ray of hope for job markets, the pace of job losses eased in May. South Korea lost about 467,000 jobs in April, marking the sharpest monthly decline in more than 21 years.

Finance Minister Hong Nam-ki said falling exports have begun dealing a blow to jobs in the manufacturing sector, but jobs in the wholesale and retail sectors showed signs of a recovery.

Hong renewed calls for the National Assembly to swiftly approve the third extra budget to help the economy recover and create jobs. 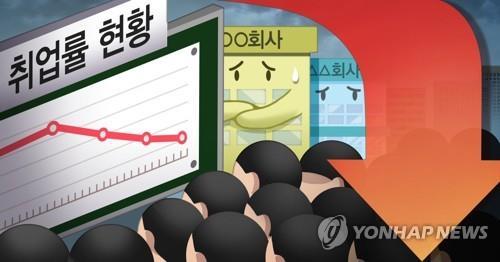 The coronavirus outbreak has hit temporary and daily employees hard, with the number of temporary workers plunging by 501,000 in May, the data showed.

May's tumble was attributed to the COVID-19 outbreak, which has dealt a harsh blow to consumer spending and corporate activities, as people have been urged to avoid going out to help curb the spread of the disease.

By industry, the wholesale and retail sector lost 189,000 jobs in May, and the accommodation and food service segment saw a decrease of 183,000 jobs last month.

In contrast, the social welfare sector gained 131,000 jobs in May, and the farm and fisheries sector added 54,000 jobs.

"The number of employed people sharply fell in the wholesale and retail sectors that require face-to-face meetings," a Statistics Korea official said.