SEOUL, June 10 (Yonhap) -- South Korea started QR code-based registration of visitors at bars, clubs and other entertainment facilities across the country Wednesday, as part of its efforts to stem the spread of the new coronavirus, health authorities said.

Around 80,000 facilities in the nation are required to use smartphone QR code-based entry logs for all visitors to keep records of their personal details.

The move comes as cluster infections traced to nightclubs and bars in Seoul's district of Itaewon swelled in and around the capital city. As of Tuesday, a total of 277 COVID-19 cases have been linked to Itaewon.

Since early this month, the country has enforced QR code-based entry logs at such facilities in the greater Seoul area and selected cities in its latest efforts to track and contain the new coronavirus.

In addition to entertainment facilities and in-door sports facilities, some auditoriums are required to adopt the QR code-based entry logs.

According to health authorities, some places designated by local governments as high risk areas are also subject to the mandatory measure. 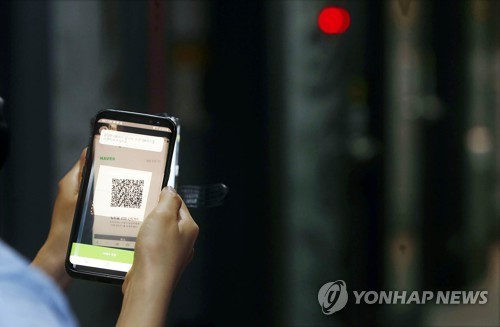 Visitors to the facilities have to get a one-time QR code via smartphone apps and submit it to the venue. The venue manager then scans the code and includes it in a digital customer registry that can be accessed if the need arises.

Some owners of entertainment facilities are not aware of the system, and some old people use 2G phones that cannot scan QR codes.

"I don't know what QR code means," said a woman in her 60s who runs a karaoke room in the Seomyeon district of Busan, South Korea's second-largest city.

Yonhap found that several karaoke rooms, a fitness center and some entertainment facilities in Busan have not started QR code-based registration of visitors.

Another fitness center in Suwon, south of Seoul, set up a signboard in front of its entrance stating that entry will be granted only to visitors who get a QR code via smartphone apps and submit it to the fitness center.

Health authorities said they will allow venue operators to keep written records of visitors, with their contact information, for those who are unfamiliar with QR code use or refuse to use the method.

Health authorities will conduct on-site inspections to make certain businesses comply with the toughened guidelines, with those that fail to meet requirements to be slapped with a fine of up to 3 million won (US$2,500) or ordered to suspend operations.

Besides bars and clubs, the government is moving to encourage religious facilities, movie theaters, hospitals and libraries to adopt the QR code logs going forward.

Private educational institutes are to be given special incentives to use the electronic log that will be helpful in protecting students from viral infection going forward.