SEOUL, June 10 (Yonhap) -- President Moon Jae-in visited a highly symbolic site in South Korea's democratization Wednesday, the anniversary of a historic uprising in 1987 against the authoritarian rule of Chun Doo-hwan.

He attended the national ceremony to commemorate the June 10 Democratic Protest, which led to a constitutional revision to empower the people to elect the country's president on their own.

The event was held at the Democracy and Human Rights Memorial Hall, located in the central Seoul area of Yongsan, where many pro-democracy activists accused of having ties with North Korea, largely college students, were brought for harsh police interrogations in the 1970s and 1980s. 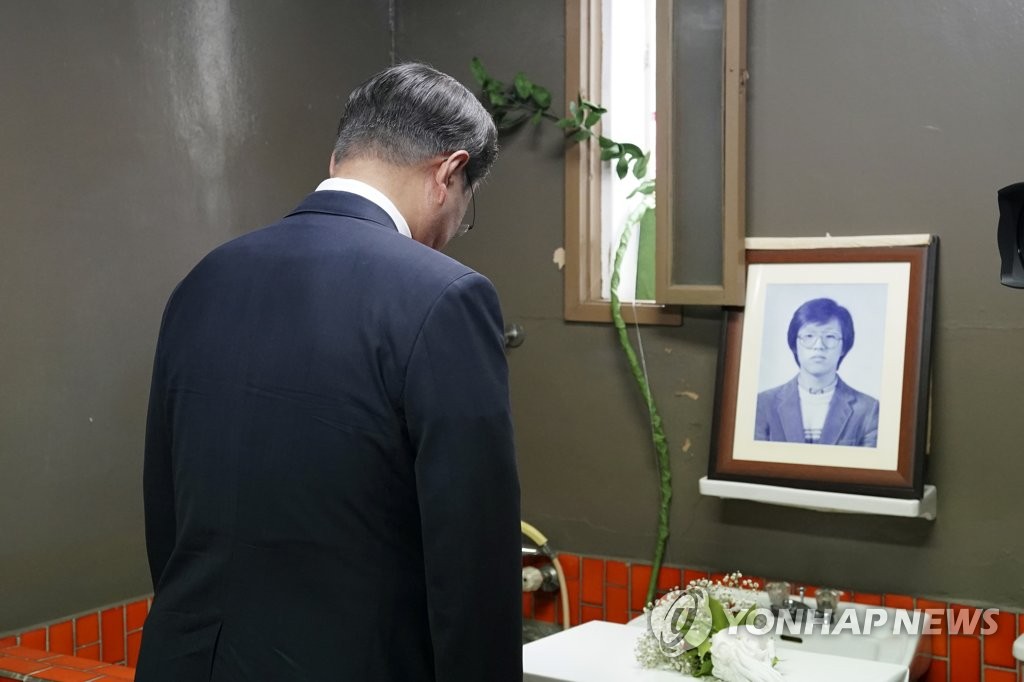 On Jan. 14, 1987, Park Jong-chul, a Seoul National University undergraduate, was tortured to death in the once notorious building in Namyeong-dong. A belated revelation that interrogators had shoved his head several times into a tub of water added to public fury against the Chun regime.

On June 9, especially, Lee Han-yeol, a student at Yonsei University, was critically wounded after being struck by a tear gas canister fired by the police during a campus rally against the cover-up of the reason for Park's death. He died July 5.

The following day, the regime of Chun, a former army general, held an event to virtually designate Roh Tae-woo, his longtime friend who went to Korean Military Academy together, as the next president.

It sparked a nationwide protest, known as the June Struggle, in which crowds of company workers and other ordinary citizens participated.

Succumbing to public pressure, Roh issued the June 29 Declaration to accept a call for the direct presidential election system, a decisive turning point in South Korea's democratization. Roh, a candidate of the then ruling Democratic Justice Party, won the election in December to become the nation's first democratically elected president. 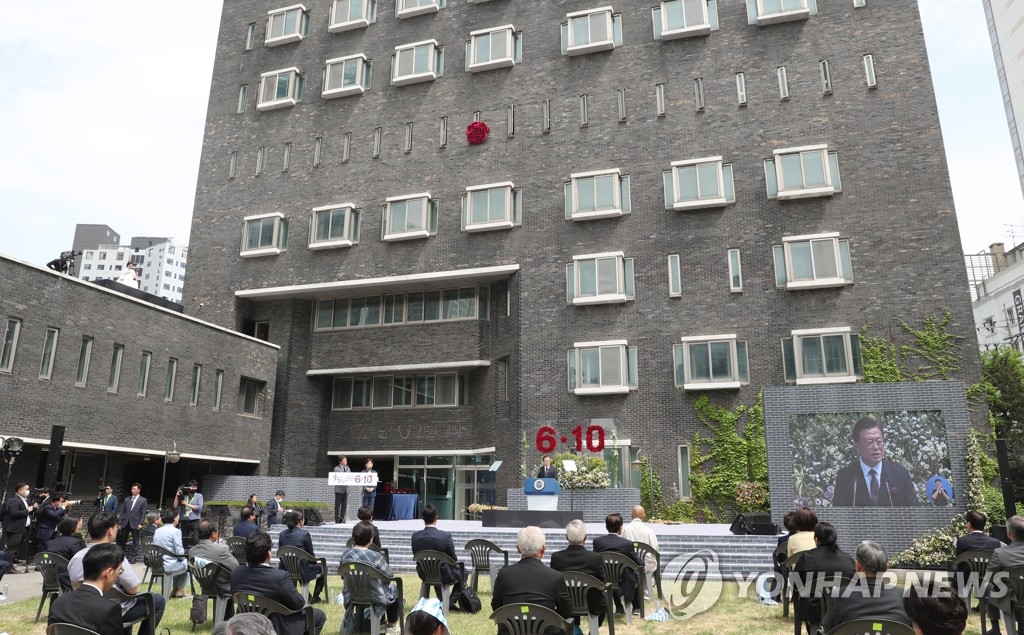 "On the day of the June 10 Democratic Protest, we made a democracy together," Moon said in a televised speech. He said South Korea's democracy features "sharing and co-prosperity," as well as "solidarity and cooperation."

"The democracy we created made the Republic of Korea a model country for quarantine against COVID-19," he added, using the nation's official name.

The president, a former human rights lawyer, said South Korea still has a way to go for a better democracy, however.

"Now, we have to move toward a bigger and more various democracy," he stressed. "We can't stop along the way toward democracy, as it's ceaselessly developing." 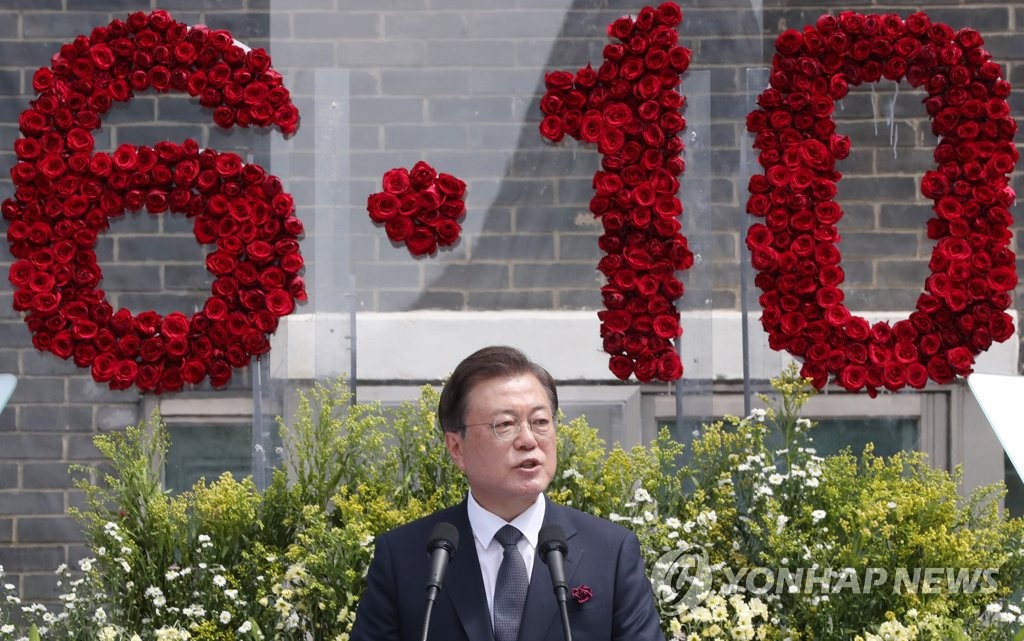 Regarding Moon's message, a Cheong Wa Dae official said he was presenting a fresh undertaking for the nation's democracy, which has achieved remarkable progress "politically."

The president was pointing out the need to promote democratic values and principles in the economic system and daily lives, he said.

During the ceremony, Moon bestowed a medal on Lee's mother Bae Eun-shim, and 11 other people including the late father of Park were posthumously decorated as well for their suffering and sacrifice in the democratization process.

It was unprecedented for the government to decorate people who dedicated themselves to the country's democracy.

Moon then visited Room 509 of the former police facilities, where Park died, becoming the first sitting president to set foot there. 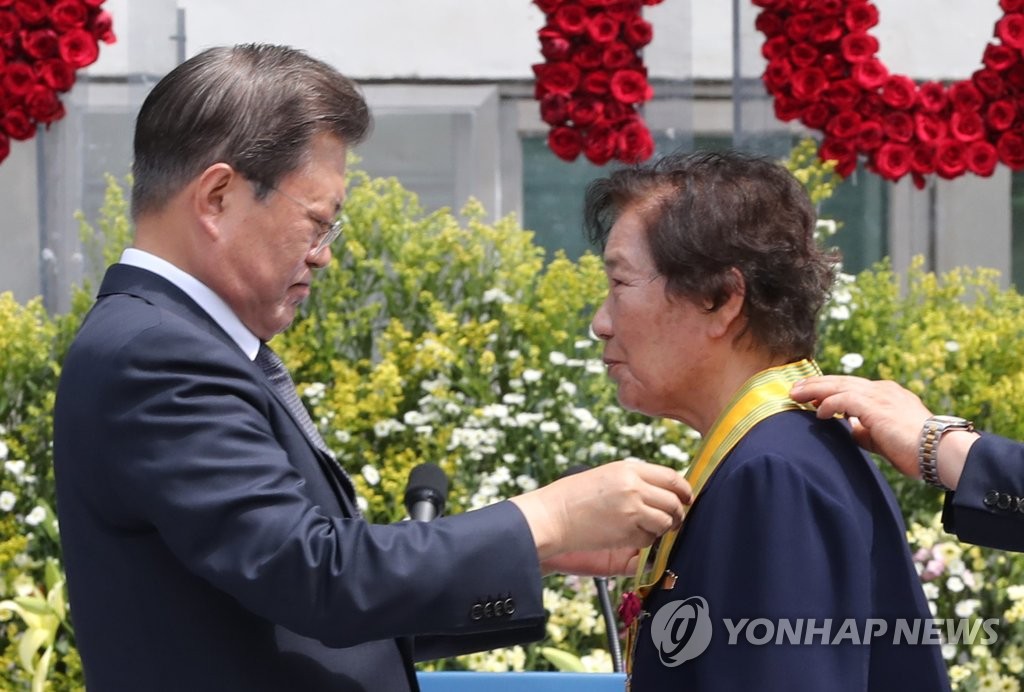 In 2018, Moon made public the government's plan to turn the seven-story structure, built in Namgyeong-dong in 1976, into a human rights museum-cum-memorial. The government partially opened it to the public, now temporarily closed due to the spread of the new coronavirus, with the completion of the transformation work due in 2022.

Min Gap-ryong, commissioner general of the Korean National Police Agency, also joined the ceremony in what his office described as a show of an apology for the wrongful use of police power in the past.