(ATTN: UPDATES with the central government's decision to withhold judgment in paras 8-11)

SEOUL, June 10 (Yonhap) -- A Seoul high school student who tested positive after visiting the nation's largest indoor theme park has been tentatively given a clean bill of health after a retest, authorities said Wednesday.

The student, identified only as a female senior at Wonmook High School in the eastern ward of Jungnang, had her first two COVID-19 tests on May 20 and 25 after exhibiting symptoms, such as a cough and sore throat, and the results were negative.

After visiting Lotte World Adventure in southern Seoul, along with three friends last Friday, however, the student tested positive for the virus Sunday. 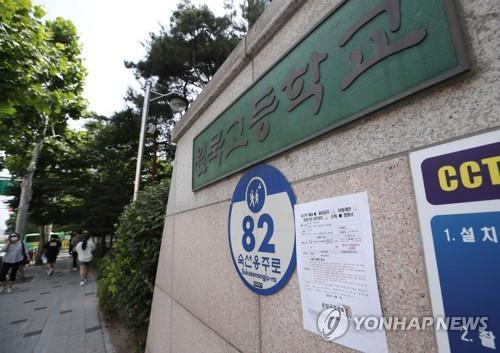 Her positive test result immediately triggered an alarm bell for quarantine authorities, who forced both her school and Lotte World Adventure to close temporarily for disinfection and ordered coronavirus tests for all 769 students and staff at the high school.

After all of the students and staff tested negative, the municipal authorities conducted additional tests on the female student and finally concluded that she is not infected with the virus.

But the central government's coronavirus command center said in the afternoon that it will withhold final judgment on whether the student is infected or not, noting any error from her previous positive test result has yet to be confirmed.

"Experts are now examining whether the student's previous positive result was false or not, with many possibilities in mind. The final conclusion has not been reached yet," Jeong Eun-kyeong, director of the Korea Centers for Disease Control and Prevention (KCDC), said in a media briefing.

As for the Seoul educational office's announcement on absence of coronavirus antibody in the student's body, Jeong said, "The rapid antibody test may have a problem in accuracy. So there is a limit in determining whether she is infected or not from the test results."

The director said the KCDC plans to conduct another test on the student's samples before reaching the final conclusion through consultations with experts and Seoul officials. Until then, the student will remain in hospital.

Meanwhile, a southern Seoul cram school said all of its 471 students and staff have tested negative in virus tests conducted after one of its cafeteria employees was found to be infected earlier this week.

The outbreak has also raised concerns over the potential spread of the virus in the large cram school where many high school graduates stay for long hours every day to prepare for a college entrance exam.

The Daesung Academy Kangnam said it will reopen Thursday and faithfully implement hygiene and social distancing guidelines in the future.