SEOUL, June 10 (Yonhap) -- The main opposition United Future Party (UFP) pressed the government to realign its conciliatory policy toward North Korea Wednesday following the North's threat to cut off inter-Korean communication lines a day earlier and regard South Korea as an enemy.

Holding an emergency meeting on national security issues, a group of six UFP lawmakers specializing in North Korea adopted a joint statement in criticism of the Moon Jae-in government's appeasement policy with Pyongyang.

"We urge President Moon to apologize to the public for his failed North Korea policy and to replace the lineup of security officials entirely," the lawmakers said.

The statement called for a full reconsideration of a military tension reduction pact signed between the two Koreas in 2018, noting the "Sept. 19 inter-Korean military agreement generated a fatal defense vacuum."

"The three years of submissive appeasement policy toward North Korea by the Moon administration and its cooperative projects that ran counter to international coordination drew finally to its end," the lawmakers argued, urging the government to fundamentally realign its North Korea policy.

The statement came one day after North Korea threatened to shut down all communication lines with the South in protest against anti-North Korea leaflets sent to the country by activists and North Korea defectors in the South.

The communist country also labeled South Korea as "an enemy," stating its external relations projects with South Korea should now be changed to ones that deal with an enemy.

Commenting on the action, Rep. Cho, who also served as a deputy foreign minister, said, "North Korea appears to be trying to institutionalize the inter-Korean relations (based on) Seoul's submissive (policy toward the North) while solidifying internal solidarity."

He said the government needs to come up with a realistic alternative after reassessing its policy with North Korea. 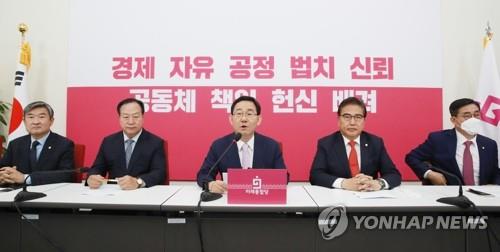 The ruling Democratic Party (DP), however warned that the opposition bloc should not make a bipartisan confrontation out of North Korea issues and asked the North for cooperation and dialogue.

"With a crisis over COVID-19 worsening, now is the right time for the North to come out for talks and exchanges with the South, based on trust toward (the South)," DP floor leader Kim Tae-nyeon said during a party meeting of senior lawmakers.

"It's a long-running issue which any of the previous (conservative and liberal) administrations couldn't settle. (UFP) should not shift its position just because it's an opposition party now," Kim said.

The DP said it will legislate a ban on sending anti-Pyongyang leaflets to North Korea and push to win a parliamentary ratification for the Panmunjom Declaration, a landmark inter-Korean declaration adopted in 2018. 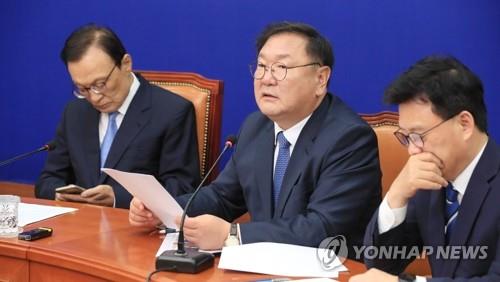