During the ministry's daily briefing, a ministry official said the decision was made to implement "effective quarantine" and to know the details of visitors in case of an outbreak.

The decision came as the new electronic registration system began at bars, clubs and other entertainment facilities on the same day to better trace potential COVID-19 patients.

Around 80,000 risky facilities in the nation are required to use smartphone QR code-based entry logs for all visitors to keep records of their personal details. 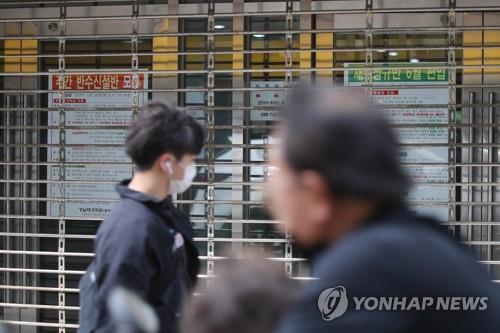 For private institutes, or hagwon in Korean, the measure will remain voluntary, the ministry said, citing that they are not visited by "anonymous" people and "attendance is under control." The ministry said it was considering giving incentives to hagwon that use electronic logs, such as an exemption to a regular inspection by the education authorities.

The move came amid a recent surge in infection cases in the capital area. The ministry urged hagwon and other facilities frequently used by young people to remain closed until June 14.

Meanwhile, the number of schools closed over virus concerns amounted to 512, or 2.4 percent of the total 20,902, on Wednesday, down by eight schools from a day ago. Among them, 505 schools or 98.6 percent are located in the capital area.

Some 493 schools in the cities of Bucheon and Incheon, which shut down due to a cluster of infections at a logistic center, will resume in-person classes again on Thursday.

Since the country reopened schools on May 20, a total of 14 people, 10 students and four staff members, have been infected with the virus.