SEOUL, June 10 (Yonhap) -- South Korean volleyball great Kim Yeon-koung has won a slew of individual trophies and team championships, and made more money than she can spend.

There's just one thing that's missing from her sparkling resume: an Olympic medal. And the 32-year-old outside hitter decided that returning to the South Korean V-League, after 11 years away, would be an important part of the preparation for next year's Tokyo Olympics -- so much so that she was willing to take a major pay cut just to have a chance to play here. 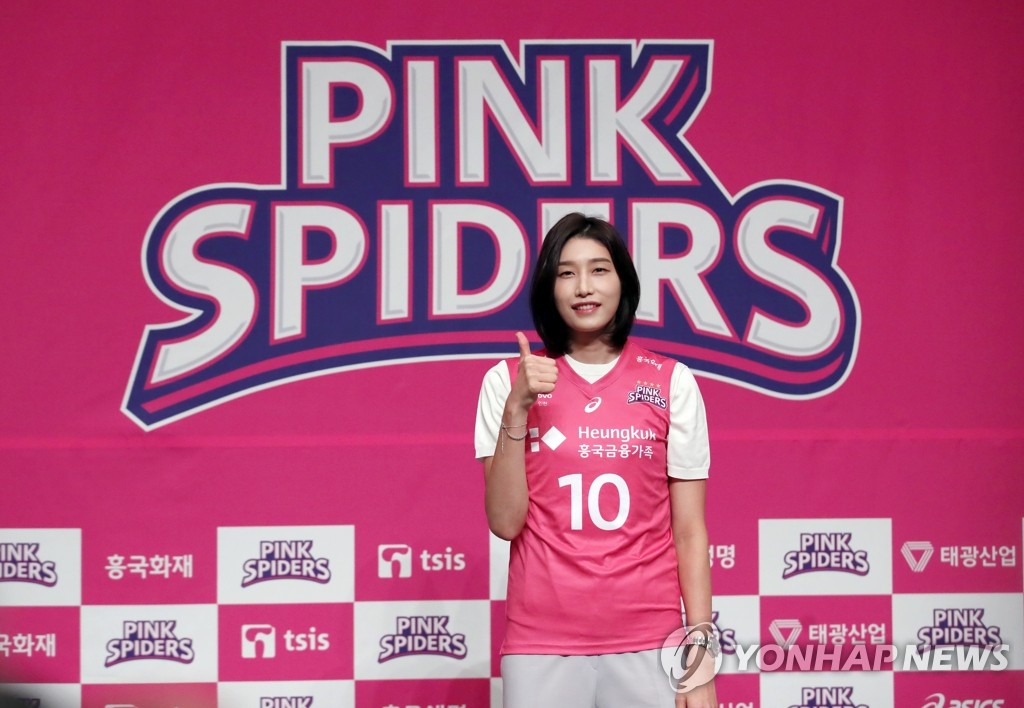 "I was thinking about how I could keep playing and maintain my form before the Olympics, and I decided coming back to South Korea would be the best way to do it," Kim said at her introductory -- or re-introductory -- press conference with the Heungkuk Life Pink Spiders on Wednesday. Widely considered the greatest volleyball player ever to come out of South Korea, Kim was back in her signature No. 10 uniform.

"Having a chance to perform was the most important element for me, and I didn't really think about money," Kim added. "I wanted to be in the best shape possible for the Olympics next year and realize my last remaining dream."

Kim signed a one-year deal worth 350 million won (US$293,940) on Saturday to rejoin the Pink Spiders, a team with whom she spent the first four years of her professional career beginning in 2005. Kim was an absolute force here from 2005 to 2009, winning three regular season MVPs and three finals MVPs while helping the Pink Spiders to three championships.

She went on to play in Japan, China and Turkey over the next 11 years. After her two-year deal with the Turkish club Eczacibasi VitrA expired in May, Kim had been eyeing a reunion with the Pink Spiders, especially given the uncertainty in overseas leagues during the coronavirus pandemic. 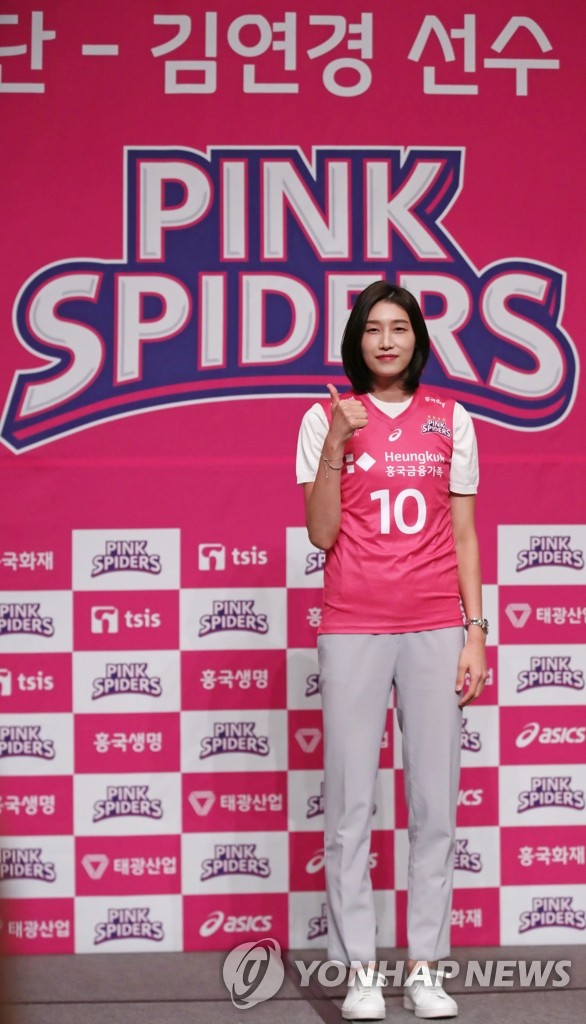 Though her exact salary figure in Turkey hasn't been made public, Kim has reportedly been one of the highest-paid volleyball players, male or female, in recent years. V-League teams have the salary cap of 2.3 billion won, and Kim may have earned more than that herself last season.

With the Pink Spiders having already spent 1 billion won on retaining attacker Lee Jae-yeong and signing free agent setter and her twin sister Lee Da-yeong, the maximum Kim could have received here was 650 million won, including incentives, under the cap rules. But to leave enough cap room for the club to sign other players, Kim signed for 350 million won.

"The one thing I want to accomplish more than anything else is to win an Olympic medal, and I felt I needed to make sacrifices to do that," Kim said. "As long as I could keep competing and preparing for the Olympics without hurting other players, I'd be okay (with the salary)." 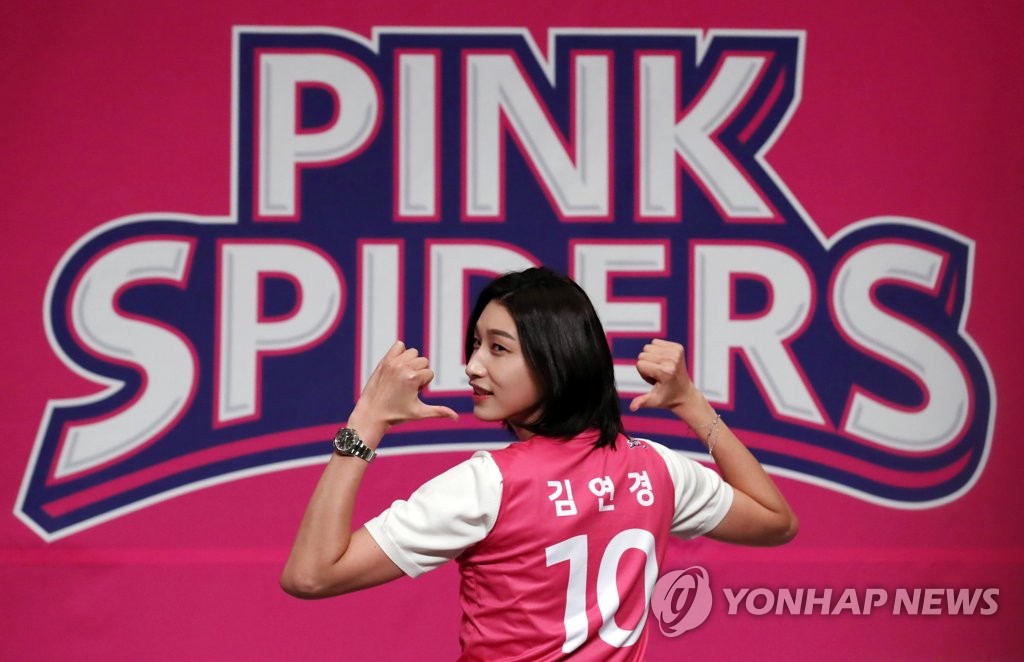 The closest Kim came to winning an Olympic medal was the fourth-place finish at the 2012 London Olympics. Kim was so dominant there that she was named the MVP of the tournament despite not reaching the medal podium.

If Kim can be a similarly destructive force in the 2020-2021 season, the Pink Spiders will be the prohibitive title favorite. The Lee twins alone would have made them a strong contender, and adding Kim makes the Pink Spiders truly a superteam.

Five other teams in the V-League may be fighting for second place. Some excited fans have been saying the Pink Spiders will run the table and win the championship without dropping a set the entire season.

Kim insisted it's far from a foregone conclusion.

"Winning in sports is never easy, and we still have to play the game," Kim said. "We can all talk the talk, but we will have to put in the work. Our goal is obviously to win the title, but there are some great teams out there."

Kim said she's learned a great deal over the past 11 years of playing overseas and she's now ready to apply those lessons to competing in the V-League.

"The most important thing I've learned over the years is professionalism," she said. "I think I grew so much as a volleyball player over those 11 years." 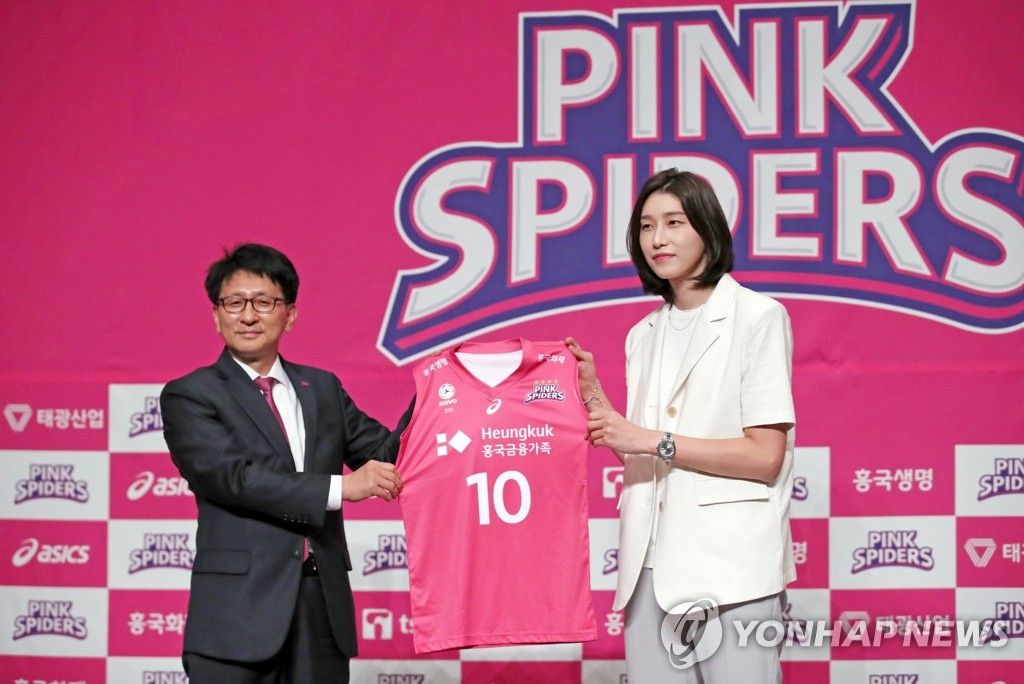