SEOUL, June 10 (Yonhap) -- The coronavirus outbreak in Seoul appears to have reached its worst point over the past week, an analysis of official data showed Wednesday, largely due to a recent string of cluster infections traced to crowds and sports facilities.

The capital's average daily number of confirmed COVID-19 cases last week already surpassed the previous high point reached in the middle of March, when the number of new infections linked to a call center in the southern ward of Guro was spiraling, according to Yonhap News Agency's analysis of the Seoul government's data.

The number of coronavirus patients isolated in Seoul's hospitals for medical treatment is also approaching the previous high point, the analysis showed. 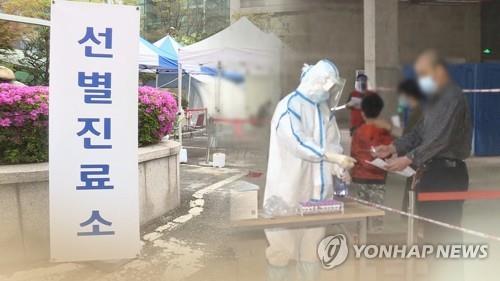 It found that the daily average of locally transmitted cases per week, or the seven-day moving average of daily cases, stood at 18.9 persons in Seoul on Sunday and 19.3 persons on Monday, compared with 17 persons recorded on March 14.

The daily average for Tuesday is estimated to hit 18.9 persons. Yonhap used the moving average method in its analysis to reduce statistical loopholes caused by decreases in the number of tests conducted on weekends.

The number of hospitalized coronavirus patients, including those who arrived from abroad, rose to 359 people as of 10 a.m. Wednesday, compared with the previous high point of 408 people recorded on April 5.

Considering the recent spike in new cases, the number of patients requiring hospital treatment is expected to continue to grow for the time being. The number of hospitalized patients was in excess of 200 between mid-March and late April before declining. Beginning in late May, however, the figure has risen above the 200 mark. 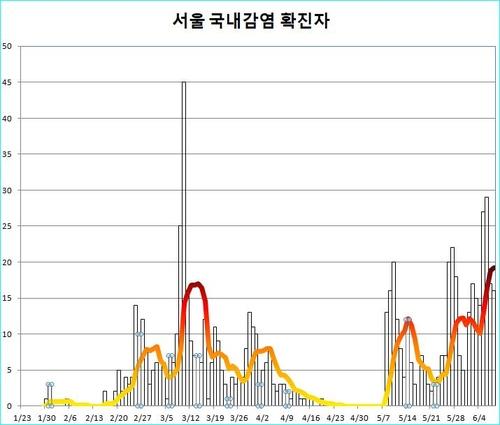 In contrast to a steady decline in imported cases, locally transmitted infections traced to clubs, churches, warehouses, call centers, indoor sports facilities and a health product retailer have broken out throughout the Seoul metropolitan area.

Since May 2, the capital's reproduction rate of the coronavirus, which reflects the average number of people getting infected by a patient, has remained above 1, meaning the virus is steadily spreading in the city.

The cumulative number of COVID-19 infections in Seoul reached 1,041 as of 6 p.m. on Wednesday. Earlier in the day, the Korea Centers for Disease Control and Prevention reported 50 new cases nationwide, raising the total caseload to 11,902.