SEOUL, June 10 (Yonhap) -- The Bucheon International Fantastic Film Festival (BiFan) and Whatcha, a streaming service provider, signed a memorandum of understanding on Wednesday to screen films for the festival's 24th edition scheduled for next month.

The movies will also be streamed online via Whatcha Play, run by the South Korean over-the-top media service company, as part of social distancing efforts amid the coronavirus pandemic.

"Online screening is an unprecedented attempt in the BiFan's history. In this transformative era, I hope this will set a milestone in establishing a synergetic model between a film festival and an OTT platform," Shin Chul, director of the BiFan organizing committee, said.

The films will be available only on the PC version of the streaming platform, which will have an exclusive section for BiFan.

BiFan, launched in 1997, had planned to show films in eight theaters but reduced the offline screen numbers due to concerns about coronavirus contagion. 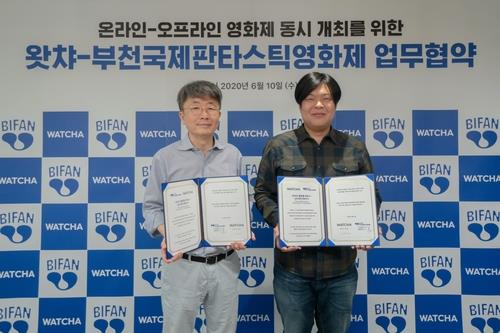