The Hanwha Eagles lost their 16th consecutive game in the Korea Baseball Organization (KBO) on Wednesday, as the home team Lotte Giants manhandled them 12-2 at Sajik Stadium in Busan, 450 kilometers southeast of Seoul.

The Eagles are now tied with the 2002 Lotte Giants and the 2010 Kia Tigers for the third-longest losing skid in KBO history.

The two teams ahead of them no longer exist: the Ssangbangwool Raiders lost 17 in a row in 1999, and the Sammi Superstars dropped 18 straight games in 1985. 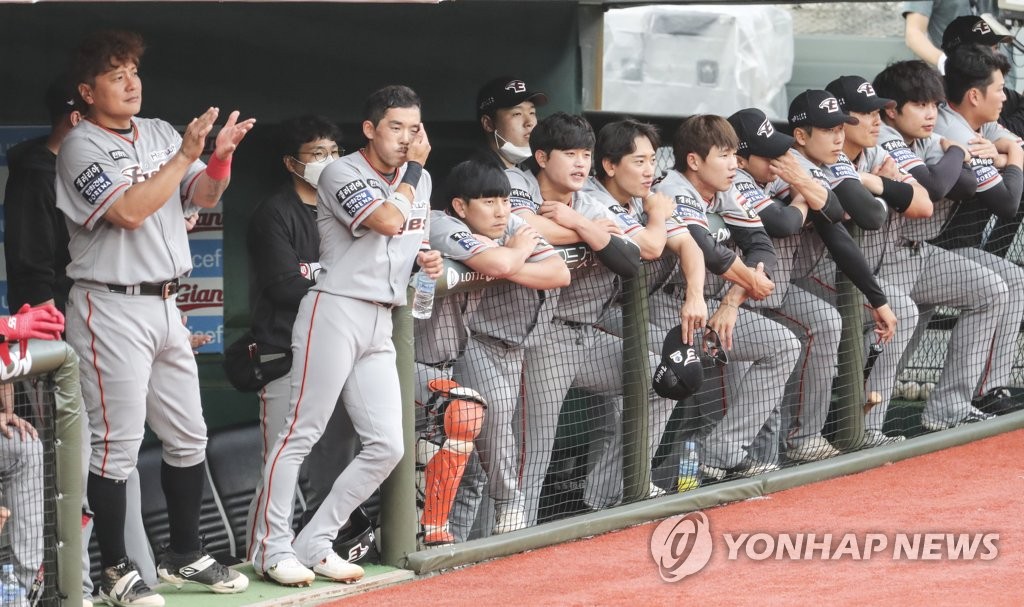 The Eagles scored the first run of the game in the top of the second inning, but things quickly went downhill from there.

After getting two outs in the bottom of the second, Hanwha starter Kim Min-woo gave up a double, a single, a walk, a three-run home run and a solo home run, as the Giants put five quick runs on the board.

Dixon Machado began that rally with the two-bagger, and Kim Jae-yu brought him home with a single. After Kang Ro-han drew a walk, Son Ah-seop blasted a three-run shot to right-center field for a 4-1 Giants lead.

Jeon Jun-woo immediately followed with a solo home run to put the Giants up 5-1.

The Giants added a run apiece in the third, fourth and fifth innings, with the Eagles eking out a run in the top fifth.

The Giants showed no mercy against the hapless Eagles, putting up a four-spot in the bottom seventh to blow the game open at 12-2.

Machado led off the inning with a triple, and three batters later, Son cashed him in with a single. Jeon's double made it 10-2. And An Chi-hong grinded out an 11-pitch at-bat before singling up the middle to drive in two runs.

The Eagles used six pitchers, who were roughed up for 14 hits and issued five walks.

For the Giants, Son went 3-for-5 with five RBIs and two runs scored from the leadoff spot. Jeon and Machado had three hits apiece.

These two teams will wrap up their three-game series at 6:30 p.m. Thursday.