Kang expressed gratitude for Britain's cooperation in dealing with the pandemic, including sharing information in advance on its new quarantine policy for foreign arrivals.

She congratulated London on the successful hosting last week of the Global Vaccine Summit to support Gavi, a global vaccine alliance led by Bill and Melinda Gates. The summit raised $8.8 billion, surpassing its target of $7.4 billion.

Foreign Secretary Raab explained the nation's coronavirus situation and thanked Kang for taking part in the summit, according to the ministry.

They also discussed issues including the countries' post-Brexit cooperation and Queen Elizabeth II's special message for the 70th anniversary of the Korean War.

The talks, held at the request of Raab, followed two phone conversations between the diplomats, in February and April, on the coronavirus countermeasures. 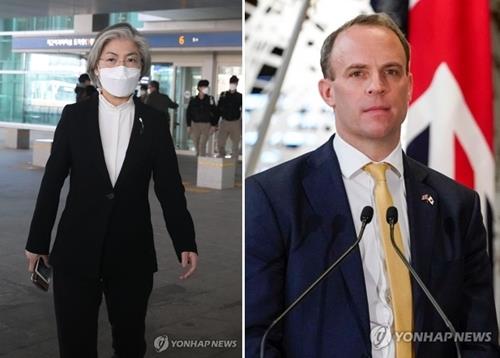