SEOUL, June 11 (Yonhap) -- North Korea warned the United States on Thursday not to meddle in inter-Korean relations if it wants to avoid experiencing an unspecified "hair-raiser" and hold November's presidential election smoothly.

Kwon Jong-gun, director general of the North Korean foreign ministry's American affairs department, made the remark after Washington voiced disappointment over Pyongyang's recent decision to cut off all communication lines with South Korea.

"If the U.S. pokes its nose into others' affairs with careless remarks, far from minding its internal affairs, at a time when its political situation is in the worst-ever confusion, it may encounter an unpleasant thing hard to deal with," Kwon said in an interview with the Korean Central News Agency.

"The U.S. had better hold its tongue and mind its internal affairs first if it doesn't want to experience a hair-raiser. It would be good not only for the U.S. interests but also for the easy holding of its upcoming presidential election," he added.

He did not elaborate on what the hair-raiser would be, but it could be seen as a thinly veiled threat to carry out major provocations that could undercut what U.S. President Donald Trump has touted as achievements in keeping situations on the Korean Peninsula under control ahead of the November presidential election.

Kwon said the U.S. is showing a hypocritical attitude by expressing dissatisfaction over the latest inter-Korean situations given that Washington has been the one bent on hampering any progress.

"Disgusting is the double-dealing attitudes of the U.S. that feels uneasy over any slightest sign of the improvement in the inter-Korean relations and pretends to get very anxious if the relations get worse," he said.

"How can the 'disappointment' touted by the U.S. be compared with the extreme dismay and resentment we are feeling at the U.S. and the south Korean authorities that have repeated betrayal and provocation for the last 2 years?"

He was apparently referring to Washington's staunch stance on keeping global sanctions on North Korea until its complete denuclearization, which stands in the way of active cross-border cooperation and exchanges.

Nuclear talks between North Korea and the U.S. have remain deadlocked since their no-deal summit in February last year as they failed to iron out differences over how to match Pyongyang's denuclearization steps and Washington's concessions, including sanction relief.

With little progress in nuclear talks, inter-Korean relations have stayed chilled. Pyongyang has blamed Seoul for taking a cue from Washington in cross-border issues and has not responded to Seoul's offers for talks and cooperation.

On Tuesday, North Korea called the South an "enemy" and cut off all inter-Korean communication lines. The move came after Pyongyang repeatedly threatened last week to abolish an inter-Korean liaison office and completely shut down other major cross-border programs, denouncing leaflet-sending as a hostile act breaching a series of peace agreements between the two sides. 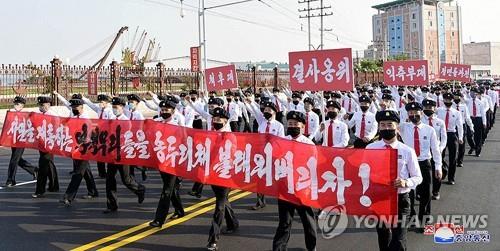