SEOUL, June 11 (Yonhap) -- No fresh coronavirus cases were reported at the military intelligence command Thursday, officials said, after an officer's infection spread to four others and forced all command members to go through testing.

On Tuesday, an Army major at the Defense Security Support Command under the direct wing of the ministry was confirmed to have been infected with COVID-19, and four of his colleagues tested positive the following day, according to the ministry.

"We tested all members of the command, and they all, excluding the five officers, tested negative," a ministry official said.

But two family members of the infected officers tested positive, including a six-year-old daughter, the health authorities said later in the day.

The exact route of infection of the first patient is not known, though three of the four officers appear to have caught the virus after eating together with the major, according to officials.

The command has implemented stringent anti-virus measures, such as remote working and banning going outside after work, they added.

As of Thursday, the total number of infections among the military population stood at 58. Of them, 43 have completely recovered, according to the ministry.

Currently, 243 service personnel are quarantined in accordance with health authorities' guidelines. In addition, military authorities have put 1,476 members in isolation as a preventive step, it added.

South Korea has seen cluster infections in Seoul and surrounding areas in recent days. The country reported 45 more cases of the virus Thursday, bringing the nation's total to 11,947, according to the Korea Centers for Disease Control and Prevention (KCDC). 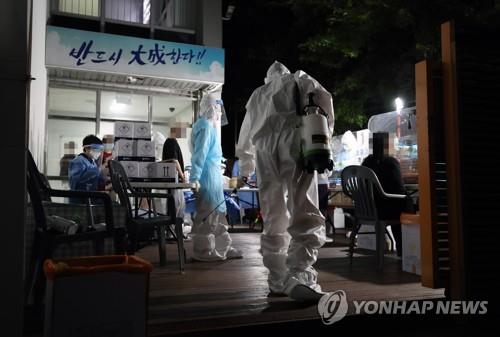