SEOUL, June 11 (Yonhap) -- The military carried out a firing drill off the east coast Thursday, officials said, amid heightened tensions on the Korean Peninsula with the North threatening to treat South Korea as an enemy.

The exercise had originally been scheduled for last month but was postponed due to bad weather amid speculation that officials could have put it off to avoid angering North Korea because Pyongyang reacted angrily to a similar drill earlier last month.

The North could protest this week's exercise too.

The biannual drill, conducted jointly by the Army and the Navy, took place in the coastal city of Uljin, some 330 kilometers southeast of Seoul, involving assets such as a new multiple rocket launcher system.

The Air Force had planned to join but reportedly did not due to poor weather conditions.

The maneuver took place just days after the North cut all communication lines with the South in anger over Seoul's failure to stop North Korean defectors from sending anti-Pyongyang leaflets across the border.

The defense ministry declined to confirm whether the drill had kicked off but said South Korea is conducting exercises under its year-round schedule.

"We carry out various exercises throughout the year according to our plan," deputy ministry spokesperson Col. Moon Hong-sik told a regular press briefing.

Last month, the North's military issued a statement over South Korea's Navy-Air Force joint drill in the Yellow Sea, calling it a "grave provocation" that demands a "necessary reaction" from its side. 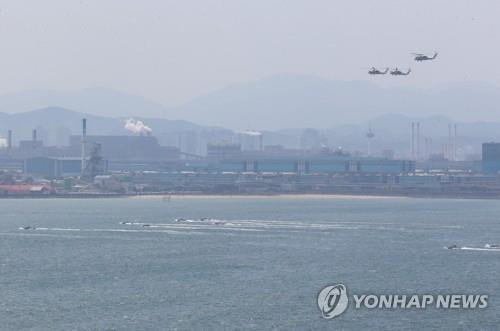