(ATTN: UPDATES with more remarks, other details from 5th para)
By Lee Chi-dong

SEOUL, June 11 (Yonhap) -- Cheong Wa Dae warned Thursday that the government would thoroughly crack down on a campaign to launch propaganda leaflets across the border into North Korea in its first official statement on Pyongyang's renewed brinkmanship highlighted by an announcement to sever all inter-Korean communication lines.

The office of President Moon Jae-in expressed "strong regret" over the continued launches of anti-Pyongyang leaflets by activists here, mostly defectors, citing a set of inter-Korean agreements intended to halt such acts.

The launches not only constitute a breach of South Korean laws, including the inter-Korean exchange and cooperation act, but also do not meet the accords between the two sides, Kim You-geun, deputy director of Cheong Wa Dae's national security office, said in a statement. 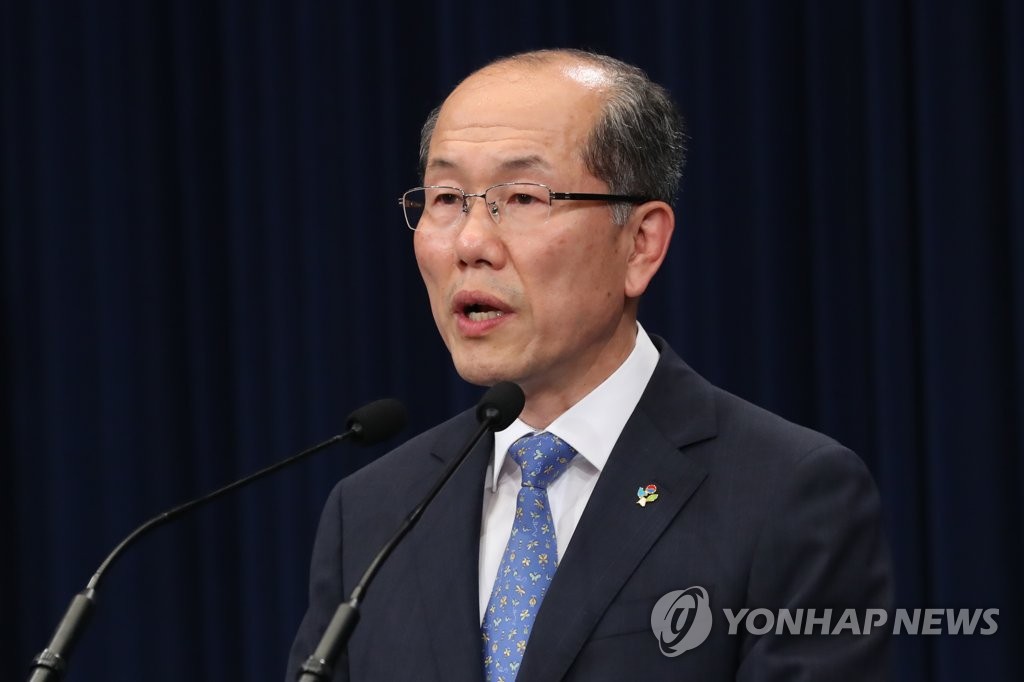 "It's of no help to our efforts to achieve peace and prosperity on the Korean Peninsula either," he added, speaking after a meeting of the National Security Council's standing committee.

The government will "thoroughly crack down" on the act of sending such leaflets and related materials across the border and deal strictly with any violation in accordance with the law, added Kim, who doubles as head of the secretariat of the NSC.

He asked civic groups to stringently follow relevant domestic laws, saying the North has stopped sending its own propaganda leaflets to the South since the 2018 Panmunjom Declaration issued by the leaders of the two Koreas after their historic summit at the border village.

He then reaffirmed the South's commitment to abiding by all inter-Korean agreements signed to maintain peace and avoid accidental military clashes.

Kim did not take questions from reporters after reading out the statement at the Chunchugwan press center of Cheong Wa Dae.

The NSC session was presided over by Chung Eui-yong, director of national security at the presidential office.

Earlier in the day, the Ministry of Unification filed a criminal complaint with police against two North Korean defector groups for sending leaflets.

They are accused of flying balloons containing written messages condemning the North's regime or tiny radios, and also attempting to hold an event to release floating plastic bottles with rice and face masks toward the North.

The ministry said the move is a violation of the inter-Korean exchange and cooperation act that bans sending goods to North Korea without government permission, as well as the aviation safety act and the public waters management act.

Critics of the Moon administration's policy on the North accused Cheong Wa Dae itself of staying silent to curry favor with the unpredictable communist neighbor.

A Cheong Wa Dae official told reporters it's not appropriate for the presidential office to react to every message from the North that newspapers here often pick up.

He mentioned Uriminzokkiri, a well-known North Korean propaganda outlet. It's just a website run by a propaganda organ operated under the wing of the Committee for the Peaceful Reunification of Korea, which is in charge of Pyongyang's daily tasks on Seoul, he said on the customary condition of anonymity.