SEOUL, June 11 (Yonhap) -- An unusually high number of people have auditioned for supporting roles in an upcoming production of "Les Miserables" in South Korea, the production company said Thursday, highlighting the severe competition for jobs among stage actors in a market hit hard by the new coronavirus crisis.

Theater company Les Miserable Korea said that the number of applicants for vacant supporting roles in the Korean-language theater adaptation of the French classic musical reached around 1,400. The show is slated for Aug. 7-16 at the Seoul Arts Center.

Stage veterans, including Oh Hyun-kyung, Park Woong, Im Dong-jin and Jeong Sang-cheol, are currently on board the production. The audition was held to cast more younger actors in the show.

The company said it hired some 50 new actors from the audition.

"The fact that some 1,400 auditioned for the roles reflects the current state of our performing arts industry," said Chung Dal-young, professor of theater management at Seoul's Dongguk University, who was a member of the casting panel.

Chung added, "Even considering that a lot of shows have been canceled due to COVID-19 and that the project is a timeless classic, the turnout was larger than expected."

The performing arts industry has been among the worst-hit sectors by COVID-19 in South Korea, with aggregate ticket sales of musicals, plays, classical concerts and other performances in April plummeting to 4.68 billion won (US$3.84 million) from the 20.9-billion-won tally in February. 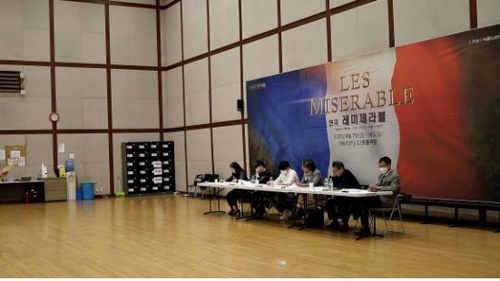