SEOUL, June 12 (Yonhap) -- North Korea said Friday its goal is to build up a "more reliable" force against long-term military threats from the United States as the two countries marked the second anniversary of the first-ever summit of their leaders. 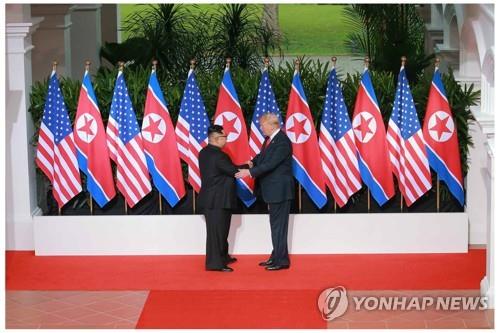 Trump and North Korean leader Kim Jong-un met in Singapore on June 12, 2018, to negotiate the dismantlement of North Korea's nuclear weapons program in exchange for sanctions relief and other concessions.

"All the above facts clearly prove once again that, unless the 70-plus-year deep-rooted hostile policy of the U.S. towards the DPRK is fundamentally terminated, the U.S. will as ever remain to be a long-term threat to our state, our system and our people."

"The United States is committed to engaging the DPRK in meaningful negotiations so that North Koreans can realize a brighter future," a State Department spokesperson told Yonhap News Agency.