SEOUL, June 12 (Yonhap) -- The provincial government of Gyeonggi, which surrounds Seoul, said Friday it will thoroughly block any attempt to send anti-North Korea propaganda leaflets across the border by designating parts of its border areas as off-limits danger zones.

The Gyeonggi government said the planned designation is one of its three measures to prevent North Korean defectors and South Korean activists from sending anti-Pyongyang leaflets and materials into the North from the northern border areas.

Under the measure, the government said it plans to designate inter-Korean border areas in four cities and counties -- Gimpo, Goyang, Paju and Yeoncheon -- as danger zones that are off limits to suspected leaflet senders. The designation can be enforced, as potential clashes stemming from the distribution of leaflets can be seen as a social disaster under the Act on the Management of Disasters and Safety, it explained, saying violators can face up to one year in prison or a fine of up to 10 million won. (US$8,300). 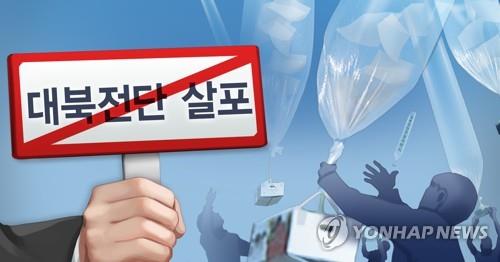 The two other measures by Gyeonggi Province are the preemptive detection and prevention of any preparations to send leaflets, such as vehicle movements and filling balloons with gas, and the mobilization of special judicial police in crackdowns, investigations and legal complaints against leaflet senders, it said.

Gyeonggi Vice Governor for Peace Lee Jae-gang said in a news conference that his government will mobilize all possible administrative capabilities to protect the lives and safety of the provincial residents.

"The distribution of anti-North Korean leaflets goes beyond a simple expression of opinions and should be regarded as a dangerous, crisis-inciting act that can cause military conflicts," said Lee.

Provincial officials said all suspected senders of anti-Pyongyang leaflets and materials will be barred from entering the danger zones, and violators will be detained for legal punishment. Distributors of unregistered leaflets will also be fined under the outdoor advertisement management law, they added.

In addition, the provincial government will apply the Wastes Control Act in cracking down on and punishing those responsible for dumping leaflets and plastic bottles containing rice on the ground or into the sea, the officials said, adding that the High-Pressure Gas Safety Control Act will also be applied to regulate the use of high-pressure gas for the North-bound balloons.

The Gyeonggi government's measures came one day after the presidential office Cheong Wa Dae warned that the Moon Jae-in government would thoroughly crack down on campaigns to send propaganda leaflets into North Korea. 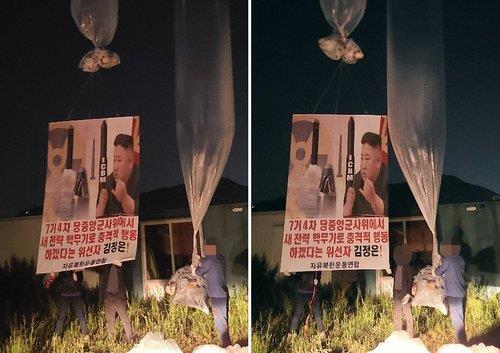 Defectors and anti-Pyongyang activists have sent a large number of leaflets and materials via giant balloons criticizing the communist regime and its leader Kim Jong-un. These are often launched with US$1 bills and USB memory sticks to get more North Koreans to pick up the leaflets.

The propaganda leaflets have lately emerged as a hot button issue after North Korean leader Kim Jong-un's sister, Kim Yo-jong, last week condemned such leafleting as a hostile act running counter to inter-Korean peace agreements. In response, the Moon government immediately promised to ban such activities through legislation, though defectors and activists have vowed not to give up their campaigns.

But the Gyeonggi government's unprecedented crackdown plan has sparked a heated debate over legitimacy, as critics question whether clashes related to the distribution of anti-Pyongyang leaflets and materials can be viewed among social disasters under the current law.

The social disasters stipulated in the current disasters and safety management law only include damage beyond the scale prescribed by the presidential decree arising from fires, collapses, explosions, traffic accidents, CBR accidents and environmental pollution accidents, as well as paralysis of key national infrastructure, spread of infectious diseases or livestock epidemics and damage from fine dust air pollution.

Aware of such a possible legitimacy problem, the provincial government said it will conduct a full legal review for its danger zone designation plan.

So Sung-kyu, a law professor at Daejin University, said expanded interpretation of the law could be possible, as far as the danger zone controversy is concerned.

"Such a designation is unprecedented. The (leaflet crackdown) plan can be controversial if it is an expanded interpretation of abstract legal provisions," So said.

"It's absurd. We have sent leaflets across the border over the past 16 years despite many obstructions," said Park Sang-hak, a North Korean defector and the head of Fighters For a Free North Korea, an anti-Pyongyang civic group.

"The latest may also end up as a rhetorical (crackdown). Before and after the June 25 anniversary of the Korean War, we plan to send about 1 million leaflets to the North as planned," Park said, suggesting that his group may use drones, instead of balloons, in the face of government crackdowns.