SEOUL, June 12 (Yonhap) -- South Korea's first military communications satellite could be launched into space from the Kennedy Space Center next month, according to a U.S. news report.

This project is part of the arrangement to offset South Korea's purchase of F-35A fighter jets from Lockheed Martin.

The Anasis-II satellite could lift off on a Falcon 9 rocket by U.S.-based commercial space firm SpaceX around the second week of July, though the schedule is subject to change, according to the report by Spaceflight Now, a news outlet specializing in space and aviation.

Airbus Defense and Space, which manufactured the satellite, confirmed Thursday that the Anasis-II was shipped from its factory in France to Florida this week "for its forthcoming launch." Lockheed subcontracted the satellite manufacturing deal to Airbus.

South Korea's arms procurement agency, the Defense Acquisition Program Administration (DAPA), however, said the date of the launch has yet to be fixed.

"More discussions are needed to arrange the schedule. Many factors, such as weather conditions, need to be reviewed. We are working to push for the project normally," a DAPA official said.

The satellite is based on the Airbus Eurostar E3000 satellite platform and will provide "secured communications over wide coverage," according to the manufacturer. Other detailed features are not known. 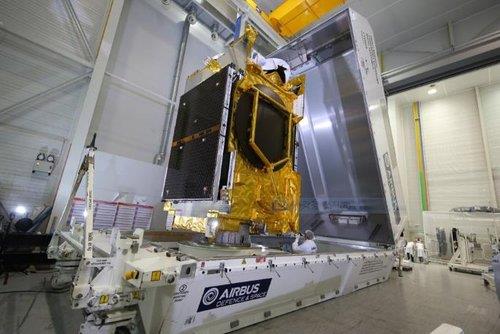