SEOUL, June 14 (Yonhap) -- South Korea's unification ministry on Sunday urged North Korea to comply with past inter-Korean agreements after Pyongyang threatened to take a "next step," hinting that major provocations against the South, including military action, might be imminent.

"The government is taking current situations seriously, and the South and the North should adhere to all agreements (reached)," the ministry said in a statement sent to reporters.

The ministry's statement came one day after Kim Yo-jong, the powerful sister of North Korean leader Kim Jong-un, threatened that Pyongyang will take a "next step" against the South and gave an instruction for the army to take necessary measures.

She did not elaborate on what the next action would be, but it is seen as a threat to push for major provocations against South Korea in the near future. 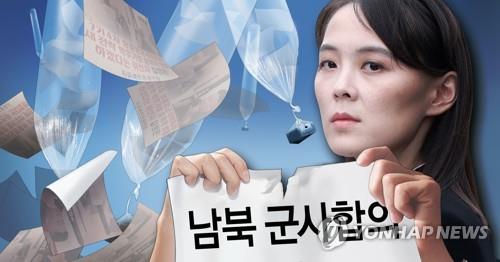 Last week, North Korea called the South an "enemy" and vowed to cut off all inter-Korean communication lines.

The move followed Pyongyang's repeated threats to abolish an inter-Korean liaison office and completely shut down other major cross-border programs, denouncing the sending of leaflets as a hostile act breaching a series of peace agreements between the two sides.

South Korea has pledged to legislate a ban on leafleting by activists here and filed a criminal complaint against two defector groups engaging in such activity.

But the North called the moves too late and "little more advanced excuses."

Seoul urges Pyongyang to comply with past inter-Korean agreements

Seoul urges Pyongyang to comply with past inter-Korean agreements