The Eagles snapped their Korea Baseball Organization (KBO) record-tying losing skid at 18 games on Sunday with a 7-6 walk-off victory over the Doosan Bears at home in Daejeon, 160 kilometers south of Seoul.

Noh Tae-hyeong delivered the game-winning single with two outs in the bottom of the ninth, giving the Eagles their first victory since May 22. 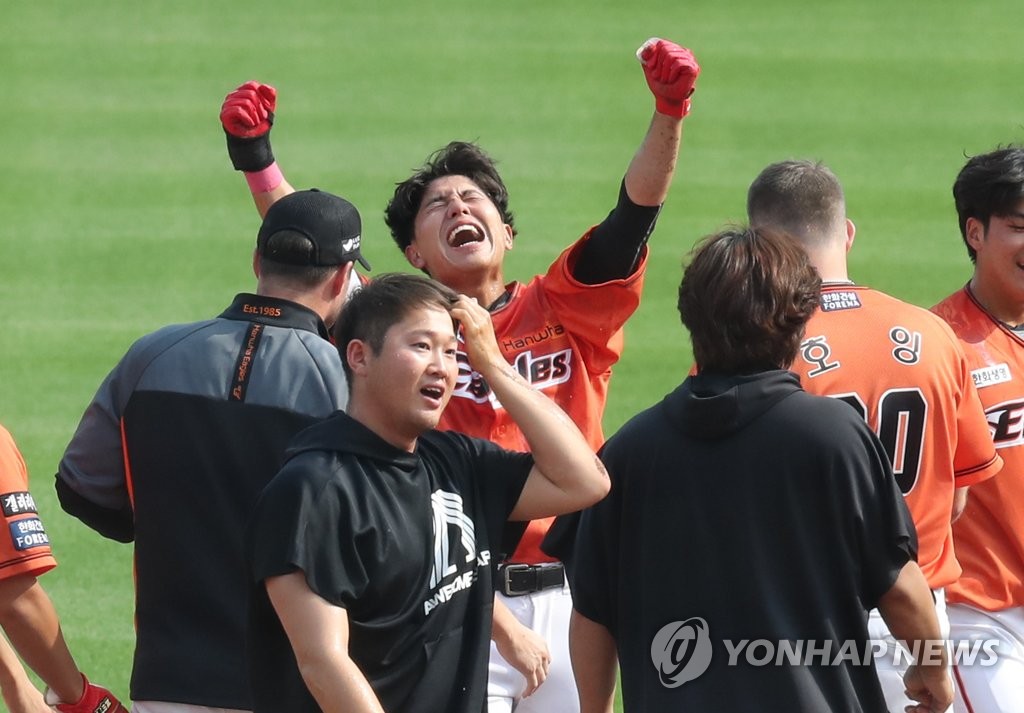 The Eagles and the Bears picked up this game from the bottom of the third, after their Saturday's game was suspended at that point due to rain with the Bears leading 4-3.

The Eagles tied the score at 4-4 in the bottom fourth on Choi Jae-hoon's RBI single, only to see the Bears go up by 5-4 with Kim Jae-hwan's solo blast.

In the seesaw match, the Eagles reclaimed their lead in the bottom seventh. Jung Eun-won came up with runners at first and second, and after an eight-pitch battle, he cashed in both runners with a double to right-center, giving the Eagles a 6-5 lead.

The Bears clawed back to even the score again, as Lee Yu-chan's single made it a 6-6 game.

Because this was the continuation of a suspended game and the teams had to play the originally-scheduled Sunday evening game for a partial double header, there would be no extra innings in case of a tie.

If this game had ended 6-6, the Eagles' losing streak would still have been alive at 18 games. But Noh, a 25-year-old rookie, made sure the Eagles wouldn't be denied this time. 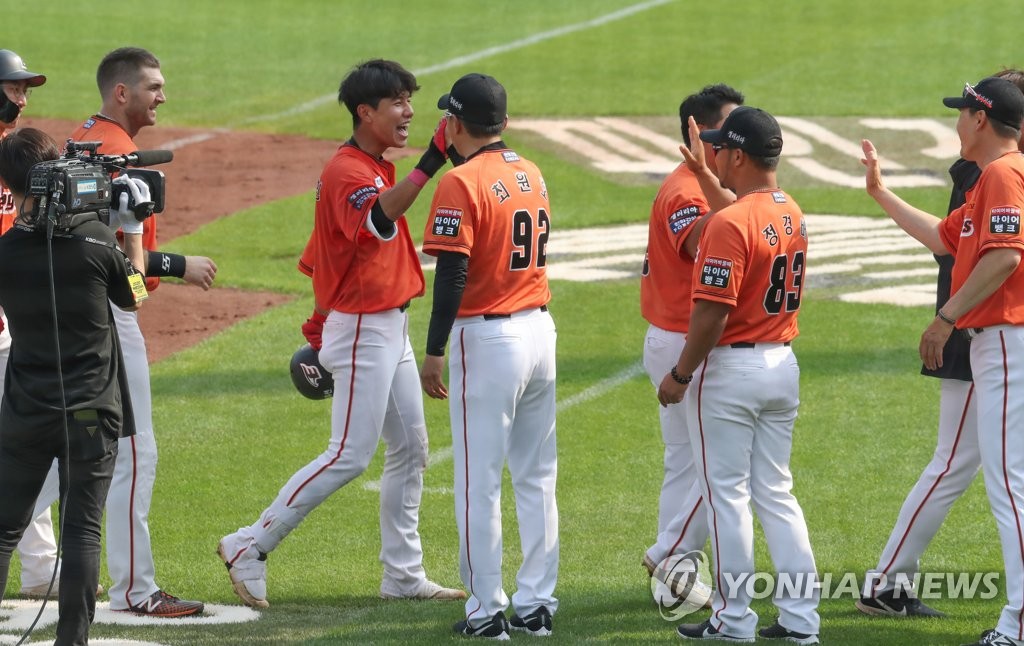 Team captain Lee Yong-kyu led off the bottom ninth with a walk, and he advanced to second on a groundout. The Bears intentionally walked Kim Tae-kyun, so that their left-handed reliever Ham Deok-ju would face slumping left-handed batter, Jared Hoying.

Hoying, who had gone 0-for-4 in the game up to that point, popped out to second for the second out of the inning, with Noh, another left-handed hitter, coming up.

At 2-2 count, though, Ham threw a wild pitch, allowing both runners to advance a base.

On the next pitch, Noh poked a single through the hole to the left. Lee scored the winning run and set off a celebration worthy of a championship victory. 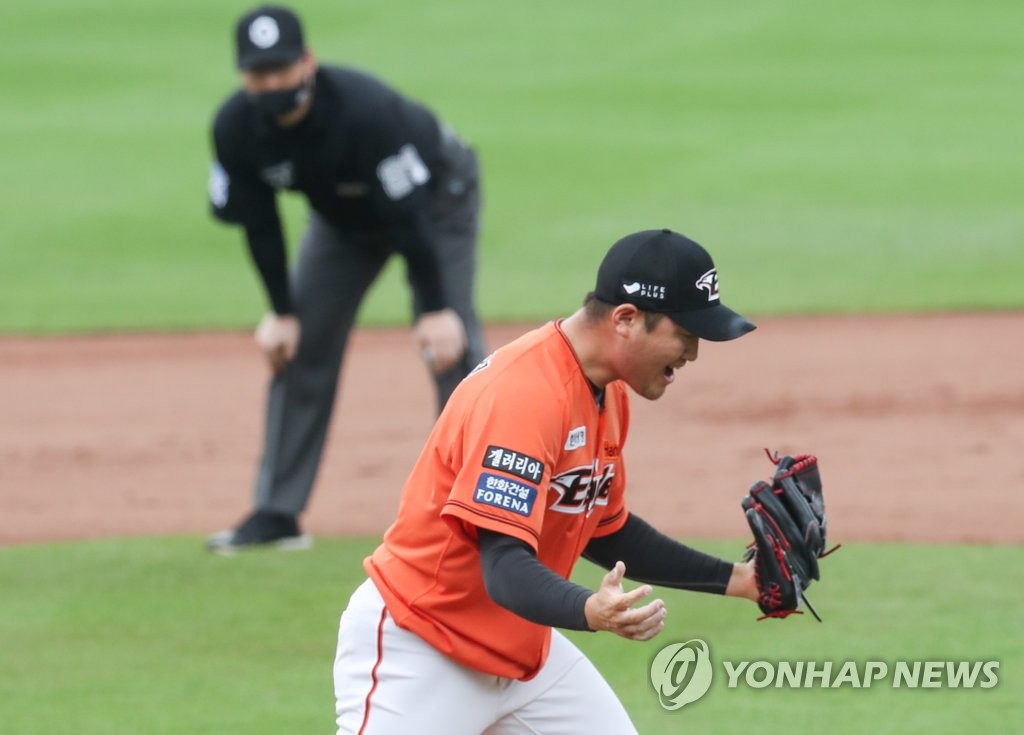 The Eagles were tied with the 1985 Sammi Superstars for the longest losing streak since the KBO's inception in 1982. During the slide, the Eagles saw their manager Han Yong-duk step down and replaced by minor league manager Choi Won-ho on an interim basis. Choi tried to shake things up by demoting 10 veterans and calling up career minor leaguers and rookies.

Based on rules guiding suspended games, this win will go into the record books as having come on Saturday, June 13, which is when the game began.

Riding high from that long-awaited victory, the Eagles also beat the Bears in the second game of the double header by 3-2, starting the Eagles' first winning streak since May 21-22, and the Bears' first losing streak of 2020. They had been the only KBO club not to lose consecutive games until Sunday.

The Eagles broke the scoreless tie in the bottom third with Choi Jae-hoon's solo home run. A single by Lee Yong-kyu and a bases-loaded walk by Jared Hoying put the Eagles up 3-0 in the bottom fifth.

The Bears cut the deficit to 3-2 in the top sixth with Kook Hae-seong's RBI groundout and Park Kun-woo's single.

Both of those runs came against Hanwha starter Warwick Saupold. The Eagles' bullpen slammed the door shut afterward, with three relievers holding the Bears to just one hit over the final three innings. Moon Dong-wook earned his first career save with a perfect ninth inning. 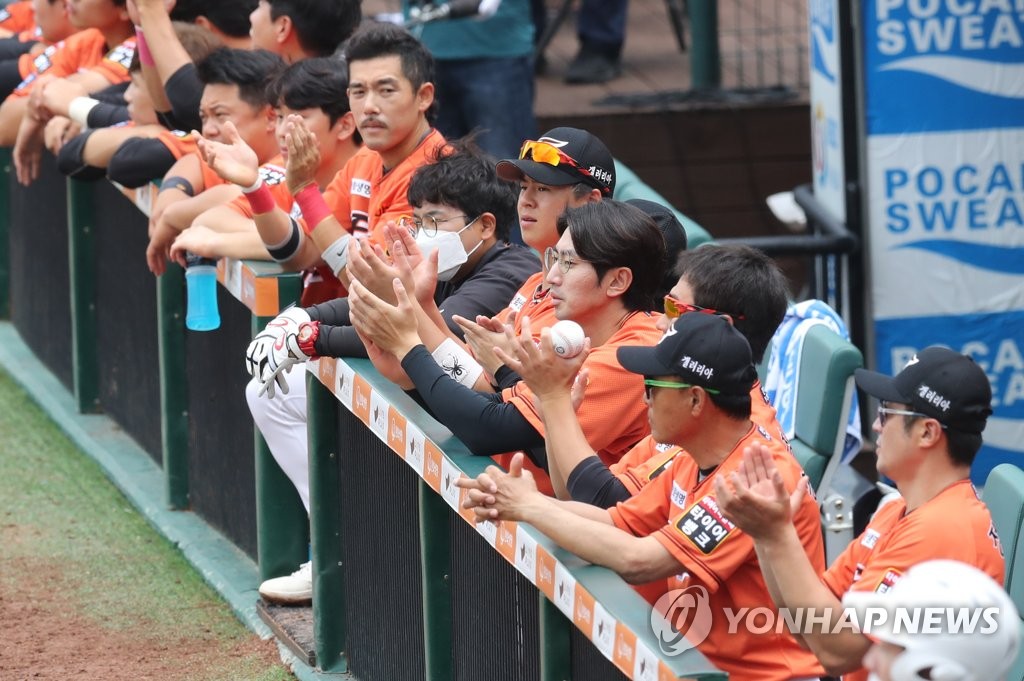