The country's two full-service carriers have suspended most of their flights on international routes since late March following lockdowns and entry restrictions around the globe due to virus fears. 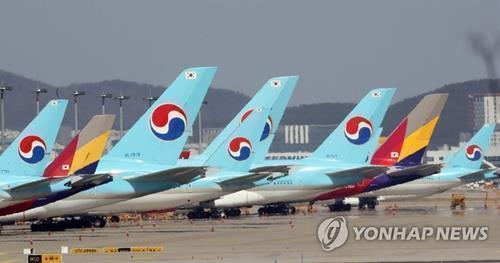 Asiana said it is also mulling restarting services on routes to Osaka, London, Paris and Istanbul next month, while planning to increase the number of flights to Hong Kong, Ho Chi Minh, Hanoi, Bangkok, San Francisco, Los Angeles and Frankfurt.

In June, Korean Air resumed flights on 19 international routes, as it strives to offset a sharp decline in passenger travel demand with increased demand for cargo deliveries.

Korean Air plans to raise 1 trillion won by selling stocks, and the country's two policy lenders -- the Korea Development Bank (KDB) and the Export-Import Bank of Korea (Eximbank) -- plan to inject 1.2 trillion won into the carrier.

The two lenders also plan to inject a combined 1.7 trillion won into Asiana.