SEOUL, June 15 (Yonhap) -- South and North Korea should remember the spirit of reconciliation ingrained in the first-ever summit of their leaders held two decades ago, the unification minister said Monday, as tensions are growing after Pyongyang threatened to take military action against the South.

Minister Kim Yeon-chul made the remark in a speech to mark the 20th anniversary of the June 15 Declaration adopted during the summit in Pyongyang in 2000 between then-South Korean President Kim Dae-jung and then-North Korean leader Kim Jong-il.

"What we have to do is to remind ourselves of the June 15 spirit at a time when the South-North relations are about to lose their directions," the minister said during an event to mark the anniversary.

"The June 15 Joint Declaration is a historic event that served as a watershed moment for the history of division," he added. "Through the June 15 Declaration and its implementation process, we have learned that peace cannot be achieved on its own." 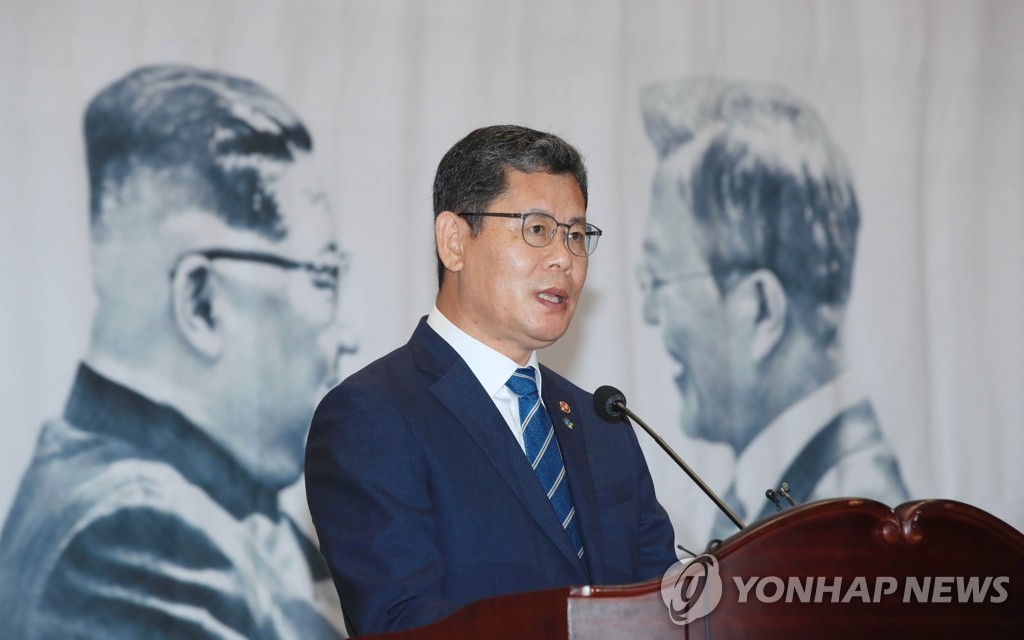 Kim noted that the summit spirit is not subservience to the stronger but autonomy, not confrontation but peace, and not division but unification, adding, "We should bear that in mind if we do not want to lose our directions amid the current crisis."

North Korea has blasted South Korea almost daily in recent weeks, denouncing the sending of anti-Pyongyang leaflets into the communist state as a hostile act that violates a series of peace agreements. Last week, the North vowed to cut off all inter-Korean communication lines in the first in a series of steps it will take against South Korea.

On Saturday, Kim Yo-jong, the powerful sister of leader Kim, ratcheted up tensions further by threatening that it is high time to break with South Korea, and she gave instructions for the army to take necessary measures to punish the South. The unification ministry urged Pyongyang to comply with past inter-Korean agreements.

Relations between the two Koreas have remained chilly, with the North not responding to any talks and cross-border cooperation since a no-deal summit between Pyongyang and Washington in February last year.

The unification minister said that peace can be realized only through mutual respect and recognition, emphasizing the importance of dialogue and negotiations that he said would help reduce cross-border tension.

Yoh Sang-key, the ministry's spokesperson, told reporters during a regular press briefing that South Korea remains committed to the implementation of all inter-Korean summit agreements.