SEOUL, June 15 (Yonhap) -- President Moon Jae-in called Monday on North Korea to leave the door for dialogue open, emphasizing the need for the two Koreas to build mutual trust based on the spirit of the 2000 historic summit accord.

"To North Korea, I request that it not close the window of dialogue," he said in a video message for an official event to commemorate the first-ever summit between the leaders of the two Koreas. The ceremony was held at Odusan Unification Observatory in Paju, just south of the Demilitarized Zone (DMZ).

In a symbolic move, Moon appeared in the video wearing a blue tie that South Korea's late president Kim Dae-jung wore two decades ago when he signed the June 15 Joint Declaration with then-North Korean leader Kim Jong-il, father of the current leader Kim Jong-un, after their summit talks in Pyongyang. 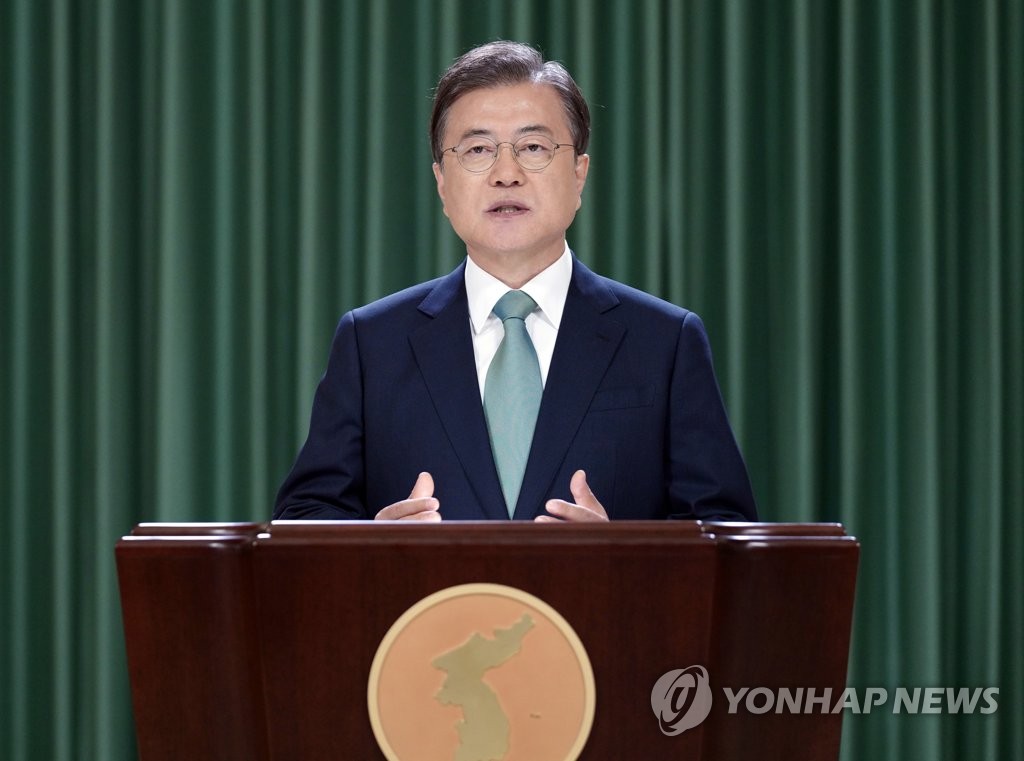 Rep. Kim Hong-gul, a son of Kim Dae-jung, delivered the tie to Moon, according to Cheong Wa Dae.

Moon reiterated a call for the two Koreas to resolve pending issues via "communication and cooperation."

"The most important thing is trust between South and North Korea," he added. "We must develop trust between the two sides through constant dialogue."

Speaking at the weekly meeting with his senior Cheong Wa Dae aides earlier in the day, the president said he's commemorating the anniversary with a "heavy heart," apparently referring to frosty inter-Korean ties highlighted by Pyongyang's decision to cut all communication lines with Seoul and even threaten military action.

"The direction the two Koreas should go together is clear," he said. "We should not stop the current inter-Korean relations again, which have overcome a longtime severance and the crisis of a war with difficulty." 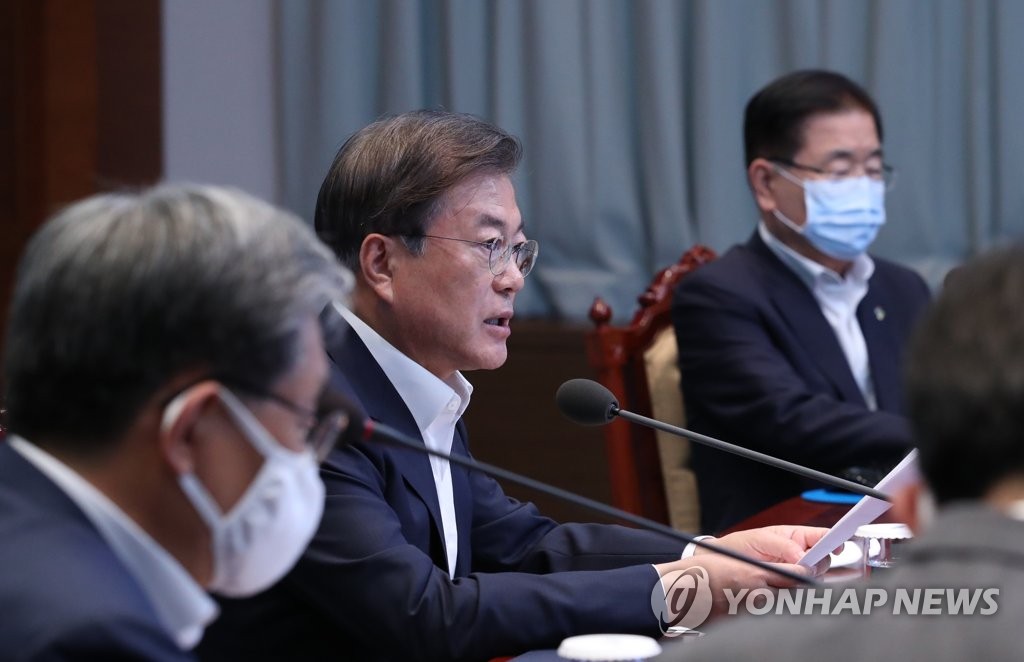 Moon cited his own summit deals with Kim in 2018, one reached at the truce village of Panmunjom and the other in the North's capital.

He said his government would make "incessant" efforts to implement summit agreements.

"(We) can't let the promise of peace on the Korean Peninsula, which I and Chairman Kim Jong-un made in front of 80 million Koreans, revert," Moon stressed.

The April 27 Panmunjom Declaration and the Sept. 19 Pyongyang Joint Declaration represent a "solemn promise" for both South and North Korea to implement faithfully, he added.

The promise constitutes a "firm principle that shouldn't be swayed by any change in security conditions," Moon said. "(The North) should not attempt to put (inter-Korean relations) back to the era of confrontation by cutting communication and creating tensions."

Noting that denuclearization talks between Washington and Pyongyang are in a drawn-out stalemate, Moon proposed that the two sides make it their initiative to produce a "breakthrough" in the peace process.

"We have come to a time when we cannot wait any more for the conditions to improve," he said, proposing that the two sides push for joint projects that they can decide themselves as the "master of the Korean Peninsula's fate."

He also raised the need for the South's National Assembly to formally approve major inter-Korean deals.

If those agreements had been ratified by the National Assembly and had "continuity" despite a power shift, inter-Korean relations "would have developed much more than now," he said. 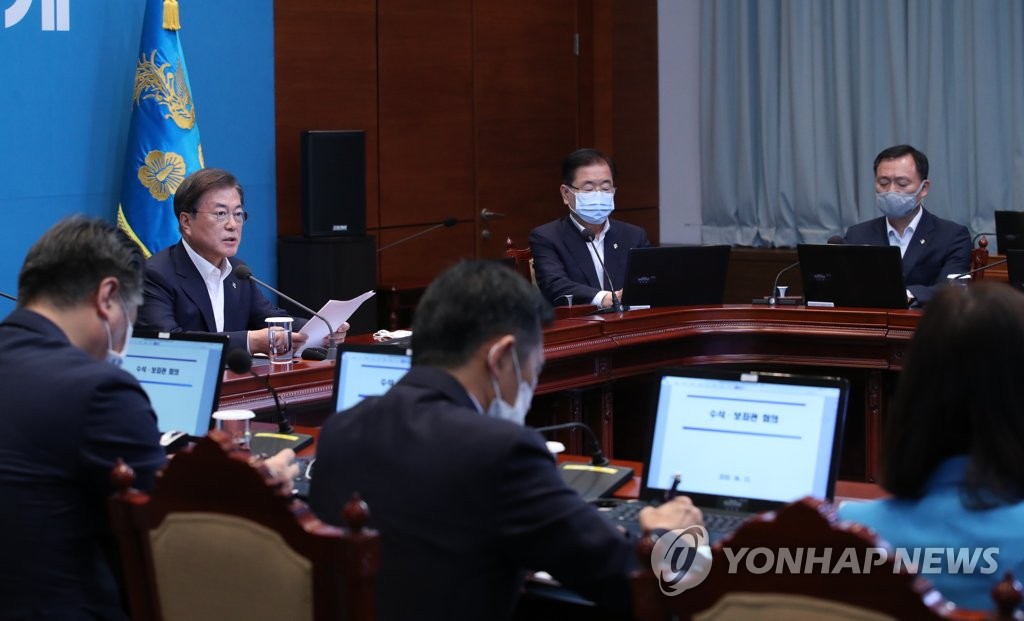 Over the weekend, Kim Yo-jong, an influential sister of the North's leader, issued yet another provocative statement saying that the military would be in charge of a next step to respond to the distribution of anti-Pyongyang propaganda leaflets by some activists here across the border.

North Korea needs to "understand differences in the political systems of South and North Korea and have trust in the commitment of the Moon Jae-in administration and the Democratic Party," Lee Hae-chan, head of the liberal party, said.

The party's floor leader, Rep. Kim Tae-nyeon, called on Washington to support the development of inter-Korean ties, asking the U.S. to help get sanctions exemptions for the resumption of the Kaesong industrial complex and the Mount Kumgang tour program.

A total of 173 lawmakers with the DP and other liberal parties submitted a resolution calling for the declaration of a formal end to the 1950-53 Korean War that finished in an armistice.

Under Moon's presidency, he argued, South Korea has failed to hold close consultations, especially with the U.S. and Japan, on the North Korea issue amid deepened diplomatic rifts with the two major powers.